Sydney FC have kept their finals hopes alive with a much needed victory on Friday afternoon, defeating a tenacious Newcastle Jets outfit 3-1 at Kogarah Oval.

Appropriately given the conditions, Savannah McCaskill was in red hot form, scoring twice for the Sky Blues. Princess Ibini grabbed Sydney’s other goal, while Libby Copus-Brown scored for Newcastle.

The Jets had problems before the game had even started.

Newcastle were already missing Katie Stengel due to injury when Cortnee Vine had to pull out during the warmup, with Panagiota Petratos taking her place. Perhaps understandably, for the whole game, the Jets lacked a threat up front to really trouble the Sky Blues.

They still made it difficult, thanks to their defensive organisation and an excellent goalkeeping performance from Britt Eckerstrom.

There were no such issues up front for the home team. McCaskill was fantastic in the centre forward role for Sydney, with her off the ball movement causing constant problems for the Jets.

There was also plenty of attacking support from Danielle Colaprico and Taylor Ray, aided by a typically solid defensive midfield performance from Teresa Polias, which allowed those two to have more attacking freedom.

This allowed the Sky Blues to control the majority of possession, however, their opener came from a counter-attack, with Colaprico and Caitlin Foord combining to set up a headed goal from McCaskill.

@SydneyFC's @CaitlinFoord and @smccaskill_21 team up to give their side an early lead over @NewcastleJetsFC!

It was fitting that the goal came from a wide area as that was where Sydney got most of their joy in this game, with McCaskill, Foord and Chloe Logarzo all finding space on the flanks, supported by occasional attacking raids from fullbacks Sofia Huerta and Amy Harrison.

While the heat may have affected the pace of the first half at times, things began to open up after the interval.

McCaskill once again showed her ability to outjump taller players, crashing a header off the crossbar from Foord’s cross, while at the other end the Jets showed they were a threat from set pieces when Wright was denied by a goalline clearance from Polias.

It was then time for the substitutes to make their mark.

With just under 15 minutes left, Princess Ibini doubled Sydney’s lead after getting on the end of a cross from Sofia Huerta.

However, the Sky Blues couldn’t shake the Jets off, and another substitute, Libby Copus-Brown, dragged Newcastle back into the contest with a wonder strike from fully 30 yards out, not a bad way to score her first W-League goal.

The Jets even went close to an unlikely equaliser in stoppage time after another set piece, and it was only the cat-like reflexes of Aubrey Bledsoe that prevented them from nicking a point.

Seconds later, Sydney made it 3-1, with Lisa De Vanna making an impact off the bench as she cut the ball back for McCaskill to score her second of the contest.

After the game, McCaskill was quick to praise the quality of her teammates. “It’s always fun to play with such a high level of talent. It makes you better, and it makes us better as a team.”

McCaskill also stated her desire to use the W-League to help her cement a spot in the US national team.

“That’s the goal, just to give them more footage so they can see me play,” she said.

“I love having someone like that, where I can put them at centre forward, I can put her wide, or I can put her in central midfield. She’s done every job, and done it to the best of her ability.”

The win means Sydney are now two points off a finals spot with four games left. Next week, the Sky Blues have a Thursday night derby against the Wanderers at Leichhardt Oval, while Newcastle meet Perth on Saturday afternoon at No. 2 Sportsground. 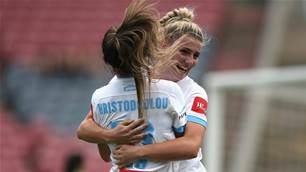