A second half knee injury against Canberra United on Sunday afternoon as ruled out Perth Glory striker Samantha Kerr for the rest of the 2014 W-League season.

A second half knee injury against Canberra United on Sunday afternoon as ruled out Perth Glory striker Samantha Kerr for the rest of the 2014 W-League season.

Kerr suffered the injury not long after putting the 2014 premiers ahead in their Round 12 clash against Canberra United.

Football West have revealed that scans on Kerr's left knee have displayed damage to the joint surface requiring surgery under the care of the Matildas medical staff.

The Women's Game has been informed that, at this early stage, there appears to be no ligament damage and the 21 year old will be out for three months.

“I’m devastated to miss the finals series but I have 100% belief in (coach) Jamie (Harnwell) and girls to go all the way,” she said.

“Hopefully, this year is our year.”

Kerr, who finished second behind teammate Kate Gill in the Golden Boot with 11 goals, is in career best form after scoring 20 goals in Australia and the US National Women's Soccer League. 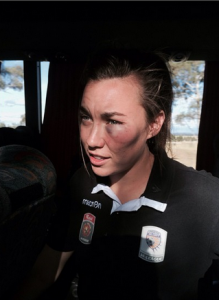 The pacy forward is anticipated to be one of the Matildas key weapons in a tough Women's World Cup group that includes World No. 1 USA, World No.5 Sweden and African champions Nigeria.

It is a significant blow for the Glory who suffered a number of casualties on the weekend with goalkeeper Mackenzie Arnold sustaining a knee to the face forcing her to be substituted.

It is understood that with no fracture to her cheekbone, Arnold should be available to line up this weekend for Perth against Sydney FC in the Semi Final 1 of the W-League.

The Glory will expect to have an almost full strength side with defender Alanna Kennedy and midfielder Caitlin Foord returning to the team after being rested on the weekend due to accumulated yellow cards.

Perth Glory take on Sydney FC at nib Stadium on Sunday, 14 December 2014. Kick off is 12pm local (3pm AEDT) with the winner qualifying for the 2014 W-League Grand Final.