Under-scrutiny Tony Gustavsson will survive the Matildas’ woeful under-achievement at the Asian Cup, with Football Australia ill-inclined dump the Swede 18 months out from the co-hosted Women’s World Cup.

The Matildas' 1-0 quarter-final exit against South Korea prompted a fire-storm of social media indignation, and an acknowledgement of profound disappointment at Football Australia's head office.

But, it's understood, the depth of feeling is not acute enough to dislodge the former USA assistant, who will have to front the peak body’s technical committee, and probably CEO James Johnson, next week to explain what went wrong for the tournament favourites in India.

Though he has presided over just six wins in his 20 games since taking charge, Gustavsson’s saving grace is that he’s viewed by FA as the chief navigator of a four-year Matildas odyssey, with the Asian Cup being a part of the journey though by no means the final destination.

And with a huge extravaganza on home soil in 2023, there is no appetite within the governing body to scrap Gustavsson’s project and start again from scratch, despite his detractors’ claims there is no discernible method or tactical direction under his watch.

There is, though, the mitigation of piloting the Matildas to the last four at the Tokyo Olympics, whilst Gustavsson's penchant for handing out caps to a plethora of emerging youngsters has also gone down at well at FA.

Those plus points haven’t registered with his critics, many of whom still lament the controversial axing of long-time incumbent Alen Stajcic four years ago, and view Gustavsson as a hollow echo of the great man.

The comparisons are made all the more poignant with Stajcic, now in charge of the Philippines, soaking up the plaudits after guiding the rank outsider Malditas to the Asian Cup semi-finals where they face Australia’s conquerors South Korea on Thursday.

FA has broken down Gustavsson’s tenure into four time blocks - the Olympics, which received a tick;  the 2022 Women's Asian Cup, a big black mark; with the World Cup and the 2024 Paris Games still to come. 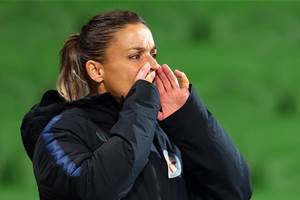 Whether Tony Gustavsson stays in charge or not, ex-Matildas captain Mel Barbieri wants clarity in tactics and selection heading into next year's World Cup.