Eight Asian teams faced off on January 30, 2022 for the first matches of the knockout rounds of the 2022 AFC Women's Asian Cup.  The evening resulted in a number of dramatic matches, a history making win and a shock exit of the Matildas.

The Quarter-Finals of the Asian Cup had a double importance for all teams competing in the Asian Cup with the exclusion of Australia.   All winners of the draws would have automatic qualification for the 2023 Women's World Cup, as this Cup doubles as Asia's qualification tournament.  As hosts, the Matildas are automatically qualified.

The three remaining losing teams still have a chance to qualify this week through a round-robin playoff which will give a fifth Asian team automatic qualification for the World Cup.  The round-robin play-off runs concurrently to the semi-finals and finals later this week.

The two losing teams of that round-robin will also have a further chance at qualification through the inter-continental playoff taking place next year.

The nineteenth FIFA ranked Chinese women took on thirty-second ranked Vietnam.  The Chinese Women are the most successful nation this tournament, with the Steel Roses having won the Asian Cup on eight occasions and always having progressed to the semi-finals since their first appearance in 1986.

The Vietnamese for their part had only ever exited the Group Stage on one occasion in 2014. These previous performances have resulted in the Golden Star Women Warriors never making a World Cup appearance. A win by China would result in their third consecutive Women's World Cup appearance, seventh overall.

While China were more dominant coming out of the gate, it was Vietnam that opened the scoring in the 11th minute.  The Chinese were able to regroup and levelled the score in the 25th minute.

The Steel Roses only strengthened in the second half, scoring two more times to ensure progression to the semi-final.  The game ended 3-1 in favour of China PR.  They are now qualified for the World Cup, with Vietnam's fate to be determined in the upcoming round-robin playoff.

The defending champions Japan took on thirty-eight ranked Thailand. A win at this tournament would mark three consecutive Women's Asian Cups for the Nadeshiko who have always make the semi-finals since 1986.

In turn Japan have qualified for every Women's World Cup.  Thailand won the Asian Cup in 1983 but then endured a thirty year struggle to exit the Group Stage.  They managed a fifth place in 2014 and fourth in 2018, booking their ticket to the two previous World Cups.

An improvement on their last tournament performance was not in the cards for Thailand though.  Missing several players due to a COVID-19 outbreak in the squad, the Japanese capitalized and dominated the outclassed Thais.

Seven goals from four different Nadeshiko players, including a quartet from substitute Yuika Sugasawa, resulted in a decisive Japanese win.

🎩 Now 𝙩𝙝𝙖𝙩 is how you complete a hat trick!

Japan are now confirmed to attend the 2023 Women's World Cup.  Thailand can still make it three appearances in a row through a win in the round-robin tournament or a win in the inter-continental playoff.

The top ranked Matildas met eighteenth placed Korea Republic in their Quarter-Final.  It was a twelfth appearance for the Taegeuk Ladies, whose highest finish was a third place in 2003.  The Australians for their part have made five appearances since changing to the AFC, winning the tournament in 2010.

The Matildas have always made it to the semi-finals of the competition, being runners up three times including the last two Cups.  The Koreans have made four-semi final appearances and in turn have qualified for three World Cups in the process.

They would secure a fourth Women's World Cup appearance on Sunday.  The game turned into the most exciting of the four quarter-finals to watch.  While the Australians were first to have the chances on goals, their attack failed to convert during the ninety minutes of play.

The Koreans looked liked they would take the lead in the 40th minute, when a VAR review awarded the side a penalty for a Caitlin Foot foul against Lee Geum-min in the area.  Aussie fans breathed a sigh of relief when Cho So-hyun missed the target and the score remained 0-0  at the break.

The efforts of Matildas keeper Lydia Williams in the second half kept the Australians in the game.  However, her efforts only went so far. With only three minutes remaining in regular time South Korea's Ji So-yun was able to push past her defender and send a shot into the top right-hand corner of Williams' net.

The score ended 0-1 in favour of Korea Republic, with the Taegeuk Ladies securing their spot in 2023.  This is the worse performance ever in the Women's Asian Cup by the Australians.

The two lowest ranked teams to make it to the knockout stage faced each other in the final Quarter-Final match.  In their ten Asian Cup appearances the Philippines, known as the Malditas, have only exited the Group Stage once in 2018.  They finished in sixth position.

Chinese Taipei have had better success.  They had back-to-back-to-back wins from 1977 to 1981, and subsequently exited the Group Stage five more times.  However, that was twenty three years ago, with the Mulan having failed to even qualify for the last three tournaments.

The Philippines have never qualified for the FIFA World Cup, while Chinese Taipei's only appearance was in 1991.

The two teams were evenly matched, with most of the action taking place in the centre of the park, and few chances on goal occurring in the opening minutes of the match.  Chinese Taipei were the first to test the goal in the first half but were unable to score.

It was the Philippines who would break the deadlock, making it 1-0 in the 48th minute.  The Mulan then tied this in the 82nd minute, with the games ultimately going to penalties after extra-time.

Malditas goalkeeper Olivia McDaniel was the hero of the shoot-outs, making two saves and scoring one in a penalties which ended 4-3 for the Philippines.

With their win the Philippines have made history, qualifying for a Women'S World Cup for the first time in their history.  Chinese Taipei still have a chance at qualification, first through the upcoming round-robin and if not through the subsequent inter-continental playoffs in 2023.

Two semi-finals, a final and three round-robin games remain in the upcoming week.  The last three games of the Women's Asian Cup will be broadcast in Australia on 10play, Bold or Channel 10.

South Korea will face the Philippines at 19:00 AEDT in the first semi-final on Thursday, February 3, 2022 while China will face defending champions Japan at 1:00 AEDT on Friday, February 4, 2022.  The final will take place between the winners of both matches on Sunday, February 6, 2022 at 22:00 AEDT.

The winner of the round-robin will claim the last automatic qualification position for Australia and New Zealand.  Both losing sides will still have a chance to qualify for the 2023 FIFA Women's World Cup through the inter-continental playoff in 2023. 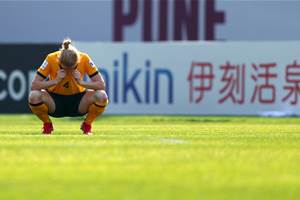