Both teams looking for the winning feeling | Credit: Getty ImagesIt's the battle of the young guns as Adelaide United host the Newcastle Jets as the W-League resumes with Round Three. 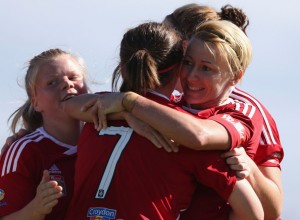 Both teams looking for the winning feeling | Credit: Getty Images

It's the battle of the young guns as Adelaide United host the Newcastle Jets as the W-League resumes with Round Three.

Both teams tasted defeat in Round 2 of the W-League with Adelaide defeated 2-0 by state rivals the Melbourne Victory while late goals saw the Sydney FC overrun the Newcastle Jets 4-0.

After a promising Round One showing, Adelaide United had their first defeat for the season when they hosted Melbourne Victory.

Melbourne opened the scoring after a controversial penalty saw Lisa De Vanna step up and score her first Victory goal past Melissa Barbieri in the 1st half.

Their second came from a beautifully slotted header from Caitlin Friend who continues to have no problem scoring against Adelaide. Melbourne came out victors with Barbieri once again the stand out for Adelaide with many quality saves, while Jenna McCormick also made a big impact on the game in defence.

Hitting the crossbar twice, Newcastle Jets were unlucky not to score a consolation goal in their match against Sydney FC. Just before the halftime whistle Sydney hit the score sheet through Renee Rollason with Sam Kerr and Jodie Taylor finishing the blow out in the second half with another 3 goals.

With both teams hitting the crossbar on numerous occasions the score could have been a lot different. In her new attacking midfield role, Tara Andrews continues to be influential for the young Jets side and would be hoping to slot one just under the crossbar this week when they meet Adelaide at Burton Park.

Both sides are searching for their first win it will be survival of the fittest.

Adelaide may need to re-work their game plan and will require their midfield to stand up and be counted. Key to that will be new signing Lisa Marie Woods.  With a two week break from football, the experienced Norwegian should be over  jet lag and ready to combine with Laura Stockdale to control the middle and the Jets will be hard pressed to stop them, and Kristy Moore, from going forward.

Newcastle will also be looking to control the midfield with Irish international Ciara McCormack signed to assist them do just that.  Another well traveled and mature footballer, McCormack will look to work with Andrews, who is another player that always seems to take her game up a notch against Adelaide. The finishing of Rhali Dobson, Adriana Jones and Hannah Beard will go a long way to the Jets getting their first points of the season.

Defensively Eliza Campbell will be buoyed by her call up to the senior Matildas. Stacey Day, who has had a good start to the season and also seems to get an extra momentum up whenever she plays against her old club and state, will be a key while vice captain Hannah Brewer will be a welcome return from injury as the Jets look to make it hard for Adelaide’s forwards.

Racheal Quigley plays her 50th match for Adelaide United and would be hoping for a similar outcome of the previous time these two teams met when United came away with a 2 – 0 win over the Jets at Burton Park.