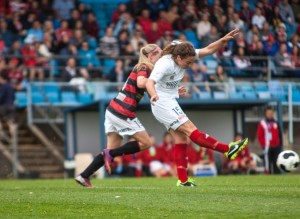 Adelaide United and Melbourne Victory meet in Round 2 of the W-League in what could prove to be a season defining encounter.

As the game progressed on ABC last Sunday, the Victory could do nothing against a well-oiled Sydney FC machine.  Even after young gun Emma Checker opened up the scoring for Melbourne, the home side were unable to withstand the Sydney onslaught as the Sky Blues came steamrolling home with a strong 5-1 win.

Meanwhile over at Marconi Stadium, Adelaide United took the lead, thanks to Alex Gummer, in their match with Western Sydney Wanderers.

Despite several key chances, the Lady Reds were unable to put the match beyond reach and ended up drawing the game with Catherine Canulli equalising in the 92nd minute.

As always the rivalry between Victoria and South Australia is strong and that rivalry is heightened by Adelaide's loss of last season’s coach David Edmondson, up and coming Matilda Emma Checker and young defender Alex Natoli to the Victorian side.

Melbourne Victory has recruited well with newly crowned FFA Player of the Year Lisa De Vanna joining their ranks.  De Vanna's value was noticeable last week as the striker worked hard to create chances for her side but, like many of her teammates, she just could not punch through the Sydney defenders.

FFA U20 Player of the Year Steph Catley was also amongst Melbourne's best but will welcome the addition of Swedish defender Jessica Sameulsson to the Melbourne back line.

After a promising match against the Wanderers, the Lady Reds look ready to meet this challenge head on.  With Melissa Barbieri in form and the likes of Kristy Moore, Racheal Quigley and Jenna McCormick playing well in the last game, they will be aiming for a first win against the Melbourne Victory.

Experienced international Lisa Marie Woods is a strong signing and the tough midfielder with the goal scoring touch will add further steel to the United midfield.

However the task will not only be on the shoulders of the seasoned campaigners but younger players such as Jessie Wharepouri, Jayah Brown and Isabel Hodgson will be called on once again step up and provide the same contribution of last week.

Contests between these two sides have always been one sided affairs with Adelaide United only scoring two goals against Melbourne Victory in all eight previous fixtures.

This would be the time where the Lady Reds will want to put their new found aggression into practice and turn the tables.