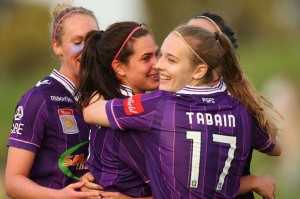 An 89th-minute header from Rosie Sutton snatched a 1-0 win for a dominant Perth Glory over Adelaide United in the Westfield W-League at Percy Doyle Reserve on Saturday.

Sutton converted a brilliant cross from her captain Collette McCallum to secure the three points for the Glory at the death after it appeared the match was headed for a draw.

Perth dominated the match and deserved the win, but failed to make the most of several chances against the plucky Lady Reds.

McCallum controlled the midfield throughout and put up two of Perth's first shots on goal and showed her class to set up her team's first win at home in three matches this season.

Adelaide did not fire a shot on goal until the 59th minute, such was Perth's dominance, but did have a handful of genuine chances in the second half to snatch an unlikely victory.

It was a frustrating first half for Perth as Jamie Harnwell's team struggled to break the sturdy Adelaide defence of Jessie Wharepouri, Daila-Tais Borg, Jenna McCormick and Snez Veljanovska.

Lady Reds goalkeeper Melissa Barbieri twice handed Sutton chances to score opportunistic goals in the first half when she fumbled the ball despite not being under any serious pressure.

Sutton should have put the home side ahead after 42 minutes after breaking through the defence and had only Barbieri to beat, but her shot went safely into goalkeeper's hands.

The Glory had seven corners to Adelaide's one in the first half, including three in a row that failed to trouble either Barbieri or her defenders as the break approached.

Veljanovska did extremely well to clear the ball from Adelaide's goal line in the 58th minute after Sasha Andrews' header from a Glory corner appeared destined for the back of the net.

Lisa-Marie Woods then called Perth goalkeeper Chantel Jones into action for the first time in the match with a long-range attempt.

Tiarn Powell had Jones beaten minutes later after finding herself all alone at the top of the box, but pushed her shot to the right of the goal.

Studman almost gifted Powell and the Lady Reds the win in the 83rd minute when the Glory defender failed to control the ball on the last line of defence, but the Adelaide striker again kicked her ball wide of the intended target.

But the Glory were rewarded for their dominance when McCallum weaved her way around the Adelaide defence and crossed the ball into a waiting Sutton with just minutes to play.