"Are you sitting down?"

Up and coming Roar midfielder Ayesha Norrie braced herself for some big news.

Head Coach Belinda Wilson had called midweek to let Norrie know that she had been selected for a starting position in the final round's fixture against Melbourne Victory.

Breaking into the starting 11 was validation by Coach Wilson of the U17 national team player and quite a big deal for the young player in her debut W-League season, particularly with the current depth of the Brisbane Roar.

Norrie was to replace her injured captain Clare Polkinghorne as the  holding midfielder; a spot that Polkinghorne arguably plays better than any other in the W-League.

For the rest of the week the talented 16 year old had to keep her outstanding news and significant opportunity to herself.

For the rest of the week the young Queenslander had to deal with constant feelings of nausea mixed with excitement, right up until the whistle blew for kick off at QSAC on 8th February.

The nerves certainly didn't show  by observing Norrie on the pitch.

Her composure and calmness on the ball displaying years beyond her footballing maturity. Senior team mate Tameka Butt agrees.

"Eesh's job in that position is to distribute, and that's exactly what she does."

No glory runs, no dive in mis-tackles.  Norrie's ability to play the "No.6" role in its purest sense, is a blessing for her team mates surrounding her.

It allows them the freedom to flourish in their own positions but look to the young midfielder as an anchor in that central channel. 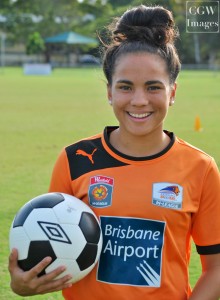 Vedrana Popovic also praised Norrie's call-up, along side with U17 captain Sunny Franco; who has also enjoyed the opportunity of game time during the season.

"Both of the girls and all our junior squad members really put in a great effort at training and it reflects during our games,"  Popovic said.

Popovic believes that as senior members of the squad they are responsible for keeping the attitude and environment positive and inclusive.  Brooke Spence also adds that there has to be a balance in a competitive environment, with a mix of expectation and effort to be recognised, as well as allowing individuals to demonstrate their own personality and flair.

Tameka Butt recalls her first introduction to the Queensland Academy of Sport squad and the Roar team, as a lone youngster, who was banded in with a lot of older and more experienced players.

"I hung out with players like Karla Reuter and Kate McShea," she remembered.

"They took me under their wing and helped me get involved with everything on and off the field, which I think is important."

Having so many younger players involved in this squad has helped remind the more senior players about what it means to relish the opportunity.

It has also added a level of enthusiasm and refreshing naivety to the group which Spence believes reiterates what football really means to the players.

"Seeing them enjoying themselves reminds all of us of why we started playing the beautiful game."

"Remembering that it's ok to relax and have a laugh at yourself from time to time."

Sunny Franco also recalls her match debut for the Roar this Season 6 against the Western Sydney Wanderers.

Franco, who has NSW origins, had plenty of family and friends in the stands to see her make her first senior W-League appearance.

"I was so nervous and full of adrenalin that after I made my very first run I exhausted all my energy levels from the rush of playing in the W-League!"  Franco said.

This type of excitement is exemplary of younger players entering a national competition at its highest level.

The opportunity to represent a reputable club and play and train in an environment thick with experience and talent,  is every athlete's dream.

All the younger players of this season's Roar squad feel that it has been a real honour to train alongside the abundance of senior Matildas and having the 2013 FIFA World Player of the Year backing up in goals is a definite bonus.

This pre-season Wilson decided to include a number of younger players in the squad as a chance to blood some of the youth coming through the Queensland and NSW ranks.

A smart decision given that the current senior core of the Brisbane Roar are getting older and some looking to retire each season.  Wilson is confident that by introducing the youth it will begin the next building blocks for the future of the domestic league and beyond.

Hayley Raso, another younger and newer member of the well established Brisbane side, cannot speak highly enough of the experience.

"Coming in to an environment, where the intensity is always high and you're always feeling the drive to boost your own individual performance to prove yourself in this squad, is great." Raso said. 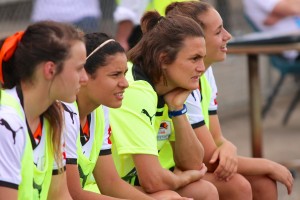 Raso feels esteemed in gaining so many starts for the season and is happy that Wilson has given her plenty of chances to prove herself.

Even for those not getting minutes in games this season they are still getting the incredible opportunity of training with some of the world's best female footballers.

To win the championship this season Brisbane Roar will have to travel away from their home support group and rely on each other to keep spirits and match day efforts at their highest level.

Former Canberra player, Raso is excited to be playing her old team in the semi and believes that her former club's supporters have always been and still remain very encouraging towards her.

Franco is hoping for a chance to shine again and once more Norrie is anticipating a call up, of some capacity, to potentially play that important holding midfield position.

She still suffers the nerves of the anticipation of game day but is relieved to have gotten her first start out of the way before the weekend.

Polkinghorne's words of wisdom were to not overthink the position.  Popovic, Spence and Butt all agree, by advising the younger players to keep it simple and to enjoy the experience.

"There's no better feeling than running out in the Orange."  Spence said.

A feeling that is echoed right across the team and will be the motivation for all Brisbane Roar players and fans in support. For the next generation of Roar players, it is an honour and a privilege to begin realising their footballing dreams coming true.

Don't sit down for too long, Eesh.  There's a better place for you than on the bench.