Hayley Raso scored her first goal for Brisbane in their win 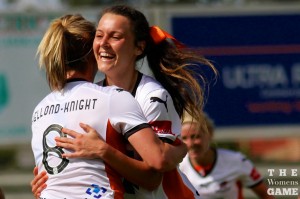 Hayley Raso scored her first goal for Brisbane in their win

Brisbane Roar showed their quality to overcome a half-time deficit and overwhelm Western Sydney Wanderers 4-1 at Marconi Stadium in Sydney.

Katrina Gorry provided the star turn in nailing a second-half hat-trick, with the pint-sized midfielder continuing her recent sparkling form over the past week with the Westfield Matildas.

The win lifts Brisbane into a share of top spot on the Westfield W-League ladder alongside Melbourne Victory, as well as both Sydney FC and Canberra United whose match was postponed due to the Sky Blues participation in the Women’s Club World Championship.

It looked like the outcome would be very different for the Roar with the Wanderers edging a sluggish opening half for a deserved half-time lead.

It was one of the few highlights of a first-half lacking in fluency as both teams struggled to gain the ascendency in the warm conditions.

Wanderers’ American midfielder Shawna Gordon and Roar youngster Larissa Crummer both had sights of goal but in truth the two goalkeepers were rarely troubled.

The second half started in very different fashion with the Roar nailing two goals in three minutes to turn the contest, and the momentum, in a polar opposite direction.

Gorry equalised from the penalty spot four minutes after the interval, having earned the penalty after being pulled back by defender Caitlin Cooper following a trademark surge into the penalty area.

Then it was the turn of substitute Hayley Raso to get on the scoresheet with the former Canberra flyer neatly converting a through ball.

The star-studded Brisbane Roar, many of whom spent the past week in camp with the Matildas, suddenly had the ascendency both on the scoreboard and on the pitch though the home side battled gamely.

Gorry left fly from distance with a shot that had goalkeeper Dimi Poulos scrambling but she was not to be denied, and nabbed her second with nine minutes remaining by converting Amy Chapman’s smart cross.

It was little surprise when the energetic Gorry made the most of a tiring Wanderers defence to coolly convert her first W-League hat-trick during injury time.