Throughout the 2020 AFLW season, the captains in the competition have all shown great leadership and it was hard to choose a player as The Women’s Game’s AFLW Captain of the Year. Melbourne champion Daisy Pearce was outstanding with her leadership, her return a year after pregnancy to twins.

The Melbourne skipper gave birth to twins, Sylvie and Roy last year, but it was like she never left, slotting seamlessly back into the Melbourne side.

Pearce was pivotal for Melbourne this season with her top-class ability to read the gameplay, her composure was second to none, and her experience thoroughly improved her team’s defense.

The move from the Dees’ midfield was unexpected, but it worked well and truly in their favour as she averaged 15 disposals at a 69% efficiency.

Pearce was one of the top midfielders of the competition with elite skills across the board and it shows the calibre of her as a player as her football smarts were high quality in defense too.

At 31 years old, Pearce had a massive impact in 2020 not only on Melbourne, but on the entire competition.

In her third season as captain, she helped Melbourne to take their game to the next level, to make their first finals series and notch up their maiden finals win, all before the season came to an untimely end because of the coronavirus crisis.

Pearce’s best match this season came in their first finals game; she accumulated 22 disposals across half-back.

The energy and determination that Pearce had to come back to play football, a high contact sport after giving birth to two babies was incredible and you could see how her presence within the team simply energised and lifted her teammates.

Her teammates have the confidence in her as a leader not only on-field, but off-field as well as she leads by example and goes the extra mile to look out for each of her players.

Her teammates, the competition and wider AFLW community were in awe of Pearce returning to the game after a year off due to pregnancy.

“I’m in complete awe of what she’s been able to do and you know no matter what happens for her career moving forward, if she can step back out on that football field, I applaud her with what she’s been through.

I wouldn’t have a clue what pregnancy’s been like and being a mum’s been like. I know it’s hard work, but to her credit to have twins and then to come back to play football... It is a true testament to, you know, how strong of a woman she is.”

Just how well is Daisy Pearce going at half back? We'll let Paxy answer... 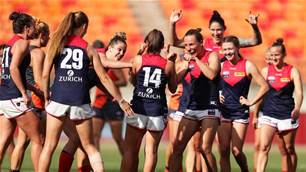 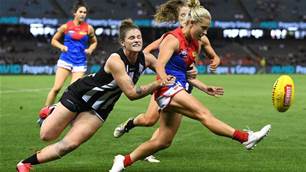 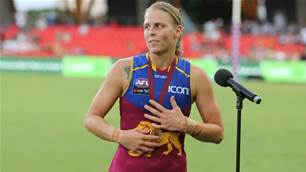 A-League job in Adelaide: why Veart can revitalise the Reds