Rebecca Beeson’s repaid the faith the GWS Giants showed her in the inaugural AFLW draft with her standout NAB Rising Star performance in their round one clash against Melbourne in early February.

Although the Giants lost that clash, Beeson did enough to impress AFLW experts on the day to earn the NAB nomination.

Beeson feels humbled by the nomination, as she feels she can play even better in the Giants remaining final round clash against the Brisbane Lions at Blacktown.

“It was such a good honour, it was very unexpected to be honest,” she said.

“I didn’t actually think I killed it or anything... but it was very exciting and such an honour to get (nominated) alongside Chloe Malloy, she’s an absolute gun and killing it at the moment.

“Obviously it’s all about the team, but it is nice to get some individual recognition along the way,” Beeson said.

Beeson grew up on the Central Coast without any pathway to playing AFL at the time, so she tried her hand at other sports including soccer and cricket.

When she was 12, her family moved to Perth and that’s when she started playing AFL in the youth girls competition.

Beeson returned to Sydney and she started playing senior women’s AFL for Macquarie University during her final years at high school.

On leaving school, she attended university at UNSW and started playing for their team and she was drafted into the AFLW from there.

Beeson, who turned 21 last week ‘will leave partying until after the AFLW season, was drafted as player number 32 in the inaugural AFLW draft from the UNSW-ES Stingrays.

She said even though she had several conversations with last year’s coach Tim Schmidt along with a ‘few people from AFLNSW’ and was confident going into the draft, she was still amazed to hear her name called out. 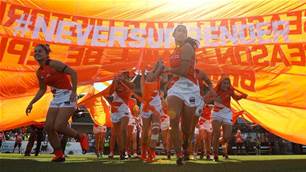