North Melbourne and Richmond have both announced important signings and re-signings to their 2020 AFLW squads.

The Kangaroos have had a raft of core players re-committing to the club with skipper Emma Kearney and the inaugural best-and-fairest winner, Jenna Bruton leading the way.

The pair will be staying with North Melbourne for a further two season and will be joined by All-Australians Emma King and Jas Garner, as well as vice-captain Britt Gibson, Kate Gillespie-Jones and Kaitlyn Ashmore.

Coach Scott Gowans, who has also re-signed, has said the introduction of two-year contracts has helped the team have security heading into an important period.

“With the introduction of two-year contracts for players, we’re able to gain some real security and develop a clearer blue-print for success. It’s great that our players are buying into our vision and seeing a real opportunity to create history here at Arden St," he said.

“For us, it’s about improvement and growth, and putting a team together that is united and committed to the club and each other.”

Meanwhile, Richmond has signed All-Australian forward Christina Bernardi for the 2020 and 2021 AFLW seasons.

Bernardi, who was originally drafted by Collingwood in 2016, is one of the competition’s most damaging forwards

“I really liked playing in Richmond’s VFLW side last year. I got to know a lot of the staff and I really enjoyed the vibe of the Club, I was pretty keen to come back,” she said.

“I’ve been in the system for a while now, so I am really excited about the opportunity to help the young kids out.”

Across in South Australia, eight premiership Crows have re-signed including 2019 All Australian Anne Hatchard.

The 21-year-old has signed a two-year contract, alongside Deni Varnhagen and Eloise Jones while Renee Forth, Justine Mules and Hannah Martin have also recommitted, with Irish recruit Ailish Considine being retained as a rookie.

The injured Chloe Scheer has also re-signed despite sustaining an ACL injury in the grand final.

“It was heartbreaking for Chloe to injure her knee in the Grand Final, but we all saw her potential during the season. Chloe has maintained a positive mindset and is very determined to complete her rehabilitation with our support and play again when she’s ready,” Crows General Manager of Football Administration Phil Harper said. 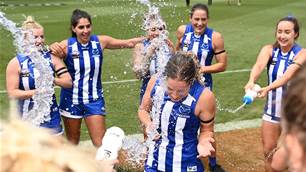