Adelaide sit second on the W-League table after their best start to a season (Photo: Emily Mogic)

Adelaide sit second on the W-League table after their best start to a season (Photo: Emily Mogic)

No one expected anything from the team of unknowns in little old Adelaide for Season 8 of the Westfield W-League.

With the track record the Adelaide United Lady Reds has had in the W-League previously, it is to be expected.

Year in and year out, all I heard from people was that they just wanted Adelaide to be ‘competitive’ and at least give the other teams a run for their money.

I knew coming in to the start of the season, that this group was special and would be a force to be reckoned with. 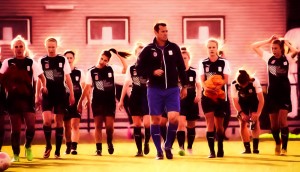 I commend our coach Jamie on putting together such an amazing group of footballers and human beings in such a short time.

As a squad we have our minds set on not being just another team in the League and making up numbers; we want to be the first Lady Reds team to finish in the Top 4 and have a crack at finals football. I have no doubt in my mind that this goal is a realistic one.

Don't get me wrong, there is still a lot of hard work ahead of us and every game moving forward is make or break, but the atmosphere at training, the sheer dedication from the girls is second to none. There is a team unity that I have never seen in the Adelaide United Lady Reds change rooms before.

From the big girls to the little girls (terms we affectionately use with in the group), we are a team; we enjoy spending time with each other on and off the park.

Game day coffee runs consists of at least 10 players together if not the whole travelling squad - even the non coffee drinkers come along for the walk.

This is something that is rarely seen in many teams and even in different sports, but I know for a fact, that I would rather be involved in a team that plays for each other and with heart than a team full of technically gifted players who play as individuals.

The quality we have within our ranks is slowly coming to the forefront. 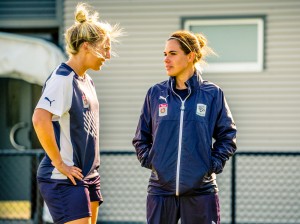 For example, Big Girl Rosie Sutton scored a hat-trick the other week against Melbourne Victory. It's a funny thing how there wasn't much hype or talk about it.

I know for a fact that if it was a well known player like Sam Kerr, Larissa Crummer or Katrina Gorry, people would still be talking about it. However, don't get me wrong, this works in our favour. People still seem to underestimate us.

We've had a tough 3 weeks on the road, grabbed 6 out of a potential 9 points and our focus now turns to Sunday’s game against Newcastle.

"We need to make a statement. We need to prove to the country and our fans, that the start of our season was exactly that, the beginning."

These next 3 weeks are huge. It will either keep us up in the mix for finals football, or potentially move us down the ladder.

Playing at home in front of our family, friends and supporters; it gives us the extra motivation, to show this state and the rest of the League just how serious we are; just how much hunger and passion we have as a playing group; to prove to all the people that doubted us wrong.

Our opponents will be tough; and are a very strong team; they will make Sunday difficult for us; but we will do everything we can to get our first win at home for the season.

We are the Lady Reds of Season 8 and we are indeed #REDlentless.