It feels like forever ago that I played W-League, season 5 (2012/13) to be exact. I still remember my season review with then coach David Edmondson back in January 2013.

It feels like forever ago that I played W-League, season 5 (2012/13) to be exact. I still remember my season review with then coach David Edmondson back in January 2013.

He told me if I could, I should go play overseas again like I did the previous season in Sweden. If that isn’t a possibility I should think about moving to either Sydney or Melbourne to play in the women premier leagues to better prepare myself for the following W-League season.

Unfortunately, as I was waiting to get the all clear for a transfer to a Norwegian club for the season ahead, I re-injured my left knee (previously had 2x ACL knee reconstructions) during a game in the Adelaide Women’s Premier League.

Unfortunately this meant I had to go in and have an arthroscopy to help clean out my troubled knee. Nine days later I had to have another arthroscopy as my medial port wasn’t closed up, meaning I was lucky enough to not have caught a bone infection.

During my rehab process I seriously started contemplating moving interstate as overseas was well out the picture. My brother’s family moved to Melbourne earlier in the year, knowing this, I knew I would have close family support if I did decide on making the move.

Therefore once I thought I completed my rehab I joined Box Hill United for the remainder of the women’s premier league in Melbourne. I 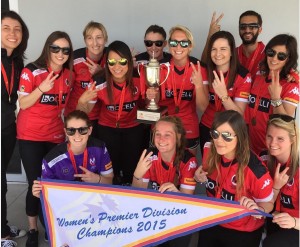 I was training with the Melbourne Victory squad towards the back end of the Premier League Season, but it took me longer than expected to make a complete recovery.

Because of this there was no chance of me winning a W-League contract. I was fortunate enough to be allowed to train on with the Championship winning team for that season, which included the likes of Jess Fishlock, Lisa De Vanna, Steph Cately, Bri Davey, Katie Hoyle, Jessi Samuelsson and Lauren Barnes to name just a few.

Whilst being injured, the one thing that helped me through that time was travelling. It is my favourite thing to do away from Football.

In the last 5 years I have travelled all around Europe (England, France, Netherlands, Germany, Spain, Sweden, Italy and of course Croatia), been to New Zealand, the Philippines, Fiji, America, Canada, Bali and Dubai making new friends and catching up with family and friends.

I have also been fortunate enough to have travelled around Australia visiting family and friends in Perth, Melbourne, and Sydney.

Due to my travel addiction, I unfortunately missed out on playing W-League last season as I wasn’t in the country for trials and the start of pre-season. At least the previous year I was still involved in W-League via training with the Victory girls. Whereas last year, I was completely out of the picture, not connected or involved in any way, just a regular spectator and weekly viewer.

I decided to use my time away from W-league wisely, by completing my coaching C license, as I have ambitions after my playing days are over to coach. It was very frustrating being on the sidelines for the season knowing I was injury free and not involved at all.

The spark was ignited and kicked me into action. As the W-League season began, I began the start of my return. This involved getting myself a personal trainer to work with twice a week; I joined PM Professional Football Academy not only coaching the boys, but being an active player alongside them.

This was an ideal “pre” preseason. Once the new year arrived, preseason with Metro United Women’s Premier league side began. I continued working with my personal trainer, metro trainings and academy sessions. 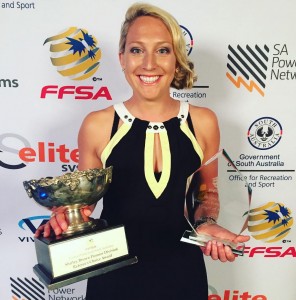 I felt that if I could continue to focus on the goal at hand, and do everything at the best of my ability; I would make my return to W-league.

As a club, we had set ourselves a goal at the start of the year to win the Double (League & Cup); something the club (Metro United Women’s Football Club) have never achieved in their 10 year history.

I made a personal goal, to try and dominate every game I played that year, to not only help the team achieve our goal of the double, but to help myself achieve my goal of returning to the national league setup.

I was then very fortunate early on the season to be invited by Lady Reds coach Ross Aloisi to train with the NTC girls here in Adelaide.

There were already a few overage and W-League players apart of the NTC squad like Izzy Hodgson, Dylan Holmes, Lauren Steer, and Gabby Bently using these trainings as extra preparations for the upcoming season. I felt that I had given myself the best opportunity over the year to earn myself a spot back on the Lady Reds roster.

When that goal became reality, my family, my friends and my team-mates were ecstatic; let alone how happy I was knowing I would be playing football again at national league level.

I was happy to just be involved with the team again, but I am truly honoured and proud to have been given the captaincy by Jamie for the season ahead.

We have a great, enthusiastic and vibrant squad; which to many outsiders looking in, we are the team of unknowns; we are the underdogs, not many people out there in the football world expect anything from us; but I have faith, I know that this squad will do damage, and I plus the girls cannot wait for this season to get underway.

We are the Lady Reds and we are #REDlentless