Racheal Quigley is a name that was always associated with Adelaide United … until this year. Having played 58 games across six seasons with Adelaide, the young ‘veteran’ striker expanded her horizons in 2013 playing with Kansas City Shock. Quigley then found herself craving a more challenging preseason environment in Victoria’s Women’s Premier League before jumping into the Victory lineup.

Quigley has settled well in Melbourne, is already scoring goals, but laments the crazy Melbourne traffic compared to the more sedate roads in Adelaide. She’s busy, but wouldn’t have it any other way.

You left Adelaide to come and play in the local WPL for Boroondara. How did you end up with Melbourne Victory?

The plan was originally just to come for the WPL because I think the league is a bit better, a step up [from football in SA]. The year before I went to America because I like to explore in the off season.

The plan was to go back to Adelaide after the WPL, but as I progressed and as I became more comfortable, there was an opportunity to play for Victory . They won last year and it would be an amazing experience to be a part of that so I pushed myself throughout the WPL with the goal to make the Victory squad and things turned out really well.

We’ve heard there’s a different intensity between Adelaide and Melbourne. Is there also a different playing culture? What do you think are the major differences between them?

In Adelaide I was one of the older ones, one of the veterans but I didn’t have as much experience as some of the players that Melbourne have now like Lisa De Vanna, even Bri [Brianna Davey] and [Steph] Catley. They bring so much professionalism into the squad and it flows throughout the whole team and the expectations are a lot higher.

In Adelaide there were a lot more mistakes but still everyone was very positive, which Victory have as well, but the professionalism and expectations are a lot more so you have to step up regardless.

We’ve seen Adelaide United develop significantly over the past couple of seasons and are on a good trajectory. What do you think about the next level of football in SA?

South Australia started late with their development approach. Since Ross Aloisi was brought in, his main goal was to build up from the young ones. We never really had that growing up in SA. You get to a point and everyone stops because there wasn’t much to go onto.

Since Dave [David Edmondson] and Ross came in, there has been a massive step up and you can tell with the young ones coming up. There are quite a few from SA that are in the Mini Matildas now so they’re on the right track. I think in the W-League it’s still a little way off but as these girls start growing up, Adelaide are going to be a force. Now they have the right coaches the players are really stepping up.

What do you miss about Adelaide?

Obviously family and friends are a big thing.

Also in Adelaide it’s very relaxed, whereas Melbourne is 100% full on. I would love to go back to Adelaide sometime soon just to calm down a little bit.  I miss Adelaide roads. They’re just so calm and nothing like Melbourne roads. Melbourne roads are insane.

How do you deal with being away from home? Do you get homesick?

It is very difficult. When I was in the US I was exploring over there so it wasn’t that big of a deal because I was loving every moment. Being here in Melbourne, being so close yet so far from them is really hard.

Being so busy helps, but when I think about it I really do miss my family but my mum is always on twitter and Facebook.

You went overseas at the end of last season to play football. What did you learn?

I went to Kansas last year and honestly it was one of the best experiences I have ever had. It was my first time away from home as well so it was all quite scary.

The people there were amazing. Their mindsets are so strong, especially within the team. Growing up I used to struggle a lot mentally. If I made a mistake I would let it get to me a lot, but in America their positivity and everything about their mindset made me think a lot and when I made a mistake I just tried harder to get back.

"I became mentally tougher because they give 100% every time. They never give up and I brought that experience back. I’m so glad I did that."

Other than travelling the world to play football, what advice would you give to young players who want to become professional soccer players?

The mental side of things. I think young ones and everyone in general puts so much pressure on themselves. Getting past that step where you don’t worry about your mistakes anymore.

Obviously you need to know what mistakes you’re making and if you’re making the same one over and over again you fix that, but just the little things that get you down and you let it ruin yourself. Once you get past that, you can move forward and just give everything you’ve got.

What are your goals for season 7 and beyond?

The Matildas is my lifelong goal. That’s the main aim. With the World Cup coming up next year that would be amazing. In the short term I want to do my absolute best with Victory.

"I want to be able to play with players like Lisa De Vanna and I want to score goals."

Possibly get a look in with the Australian team but also I would love to go over to the States again for the off season.

Do you have a player, person, or coach who acts as a mentor to you on and off the field?

On the field Lisa has taken me under her wing. Even outside of training she’s working on the little things so that it will help the whole team. The fact that she has taken her time to fill me in on what's expected is great. She doesn’t sugar coat it either.

Also the American’s that have come in with their professionalism on and off the field, I definitely look up to them too.

What has been the best moment of your football career to date?

I would have to say playing in the Young Matildas when I was 17. Travelling to Malaysia was one of the best experiences I’ve ever had. Standing up for the national anthem. 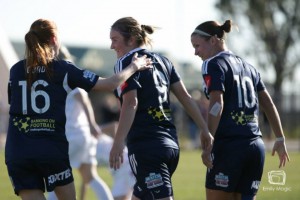 If I didn’t have that experience I wouldn’t know what I was missing out on right now with the Australian squad and of course going over there and scoring five goals in the competition. Then also Goal of the Year, that was amazing as well. I’ve never scored a goal like that. I know that I’m capable of doing it and I know I can do it again.

Who has been the toughest opponent so far in your career?

Teresa Polias. She’s a smart player. She’s everywhere. She’s like that silent player who does so much damage.

I got to play with her in the Young Matildas. Growing up with her, she constantly keeps improving. She’s definitely a tough opponent.

How do you think Melbourne are playing so far? It was a fair result against Sydney but I’m sure Victory were hoping to walk away with a win.

It was a very tough game. It was quite even in patches, especially towards the end we were really pushing for it and I think we got the better of them. We were just unfortunate with not putting away the passes.

We’re doing well though. We obviously had a rocky start to begin with and I don’t think we are playing to our full potential yet. I’m super excited when we do because our team can do so much. I think our team is very very strong.

You recently suffered a concussion. From your experience, talk us through some of the medical standards the W-League has in place to protect the players.

It’s up to the player whether they come off or not. I did try to continue to play but I wasn’t able to give everything I had. Obviously if I came off someone else was going to do just as good a job as me.

"After coming off I received attention straight away from the Sydney team doctor. She asked some hard questions like what the date was. I’m never entirely sure with that anyway but I knew what day it was."

The doctor was very demanding with the assessment and eventually said I couldn’t go on again. At that point, it is down to the doctor as she explained how serious it could be. They looked after it very well and were very informative.

Now I’m not allowed to fully train until later in the week. I just have to make sure I do everything right and don’t do anything to jeopardise that.

After football what are your aspirations? What pathways are you interested in?

I definitely want to be involved in football. It has and always will be part of my life. I think there are many roles that I could take. At the moment I’m just focusing on playing.

I would love to be part of the development of players. I already coach individually and I would love to make football for women just as big as it is for the men.