W-League players have a habit of disappearing, heading back to university or work, going abroad or surrendering to the toll football takes on their bodies.

W-League players have a habit of disappearing, heading back to university or work, going abroad or surrendering to the toll football takes on their bodies.

Some take gap years, and one such pair are Sally Rojahn and Grace Field, who have opted not to suit up for Canberra United this season. Naturally, there were some questions which Sally and Grace sat down to answer.

The 2014 season was a big one. What it was like playing a Grand Final in Perth last year?

Sally Rojahn: It was good, it was amazing to win. It was very unexpected and when we started scoring all the goals, I was like ‘what is happening.’ We had never really won a premiership before.

I won the first one, but I didn’t play, so it’s not like I won it. We both played through the year.

Sally, you had surgery, what was that for, and how are you?

SR: So I had surgery a year ago on my right ankle. Stuff had been happening, I had to wrap it all season. So I had surgery even though it wasn’t right during the season just because it wasn’t getting worse. They were able to strap it and it just hurt a lot when I played, but I was able to.

That was all fine, the surgery went great, and then a few months ago when we were playing futsal, my other ankle went. So I’ve been out for two months. I did my syndesmosis. It’s getting better now but it just had bone bruising so I can’t run for another month or two. But I don’t need surgery, which is good. 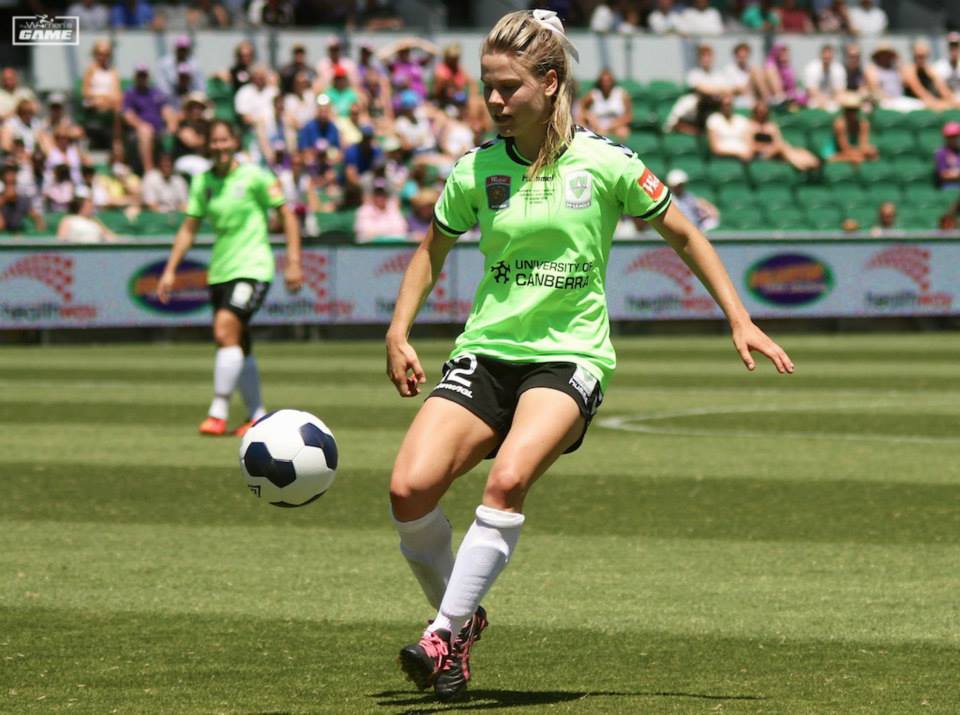 Sally Rojahn in action in the 2014 Grand Final

You both have decided to sit out this season. What as the reasoning behind the decision? Was it your ankle Sally?

SR: No, I only did that after I’d already said no. We were overseas when we decided. I think Grace, you were back by then. I was still overseas when I decided. It was just mainly, I hadn’t trained much throughout the year.

And all the girls had been training heaps, and we went overseas for two months and we obviously did not run. We came back and preseason was two weeks away. It’s not fair, for us and for the team to go into it when you hadn’t trained.

We hadn’t had a season off in years.

Grace Field: It was kind of different for you, because you were playing. For me, it was like I’d been here and there playing on and off the bench and I was like I can’t do this again.

Was it helpful having each other to make the decision not to play together?

GF: I think, yeah a little too helpful.

SR: I mean, we’ve always sort of- “I guess Grace is out too.” (Laughter) I swear we make different decisions, which we actually did. Because, I hadn’t talked to Grace when we made the final decision.

We talked about it overseas, but we tried not to talk about it because we were just trying to enjoy overseas. We finally did make separate decisions.

GF: and we did it for different reasons, obviously because as I was saying I did it because I was struggling through for so many years and was just like I can’t do this anymore (and you had uni).

Honestly I don’t think I could have done both this year. At all. I was kind of happy with that decision. But, I don’t know what the next two years holds then if I felt like this this year with a full course load.

Are you missing football, playing the W-League?

SR:  I have a little bit. Not the training probably. The games. I haven’t been able to run for a really long time so it’s really frustrating. We were talking about it, and I might probably miss it a bit more (because of the injury) just because it’s something, it’s doing something. I haven’t been able to do anything for a while. Obviously miss the team environment.

SR: We miss the girls, we’ve tried to catch up with them because it’s different going from seeing 20 girls every night to not. 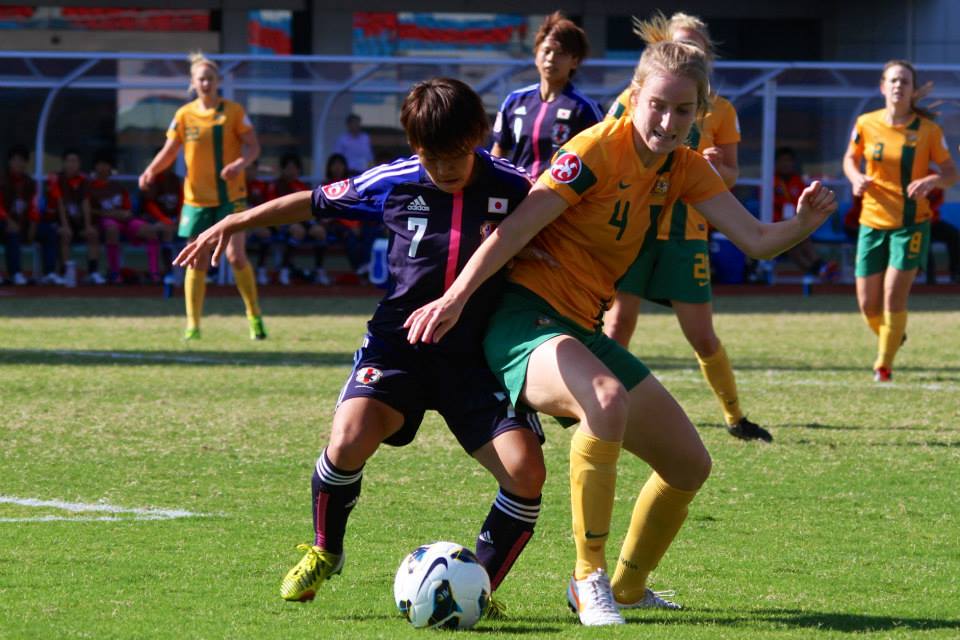 Grace Field taking on Japan in the 2013 AFC U19 Championships

Football has been a big part of both of your lives. Women’s sport in Australia is full of crossover players, have you played other sports? Why football?

GF:  I quit everything to play soccer, I did everything when I was little. Swimming, tennis and running.

I wanted to play a team sport. I think at the end of the day that was my- it was a big sport at the time, you’re pretty surrounded by it. And obviously my brother played. That was always the one I could play with him.

SR: My parents are tennis players, so growing up I played tennis and soccer and then it got to a point where they kind of decided, dad said you have to pick one, and they wanted me to do soccer, because mum grew up playing tennis and thought playing a team sport would be better.

GF: I think it was a good decision, the amount of people you meet

SR: you meet a lot of people

GF: and the community is crazy in Canberra.

You’re both 21. Caitlin Munoz just found herself recalled into the national squad and players like Thea Slatyer, Selin Kuralay coming out from retirement to play. How do you feel about longevity in the game?

SR: I think, yeah it was more, if you don’t take the break now, then you don’t know whether, and how long you’re going to last. I talked to Heather about it and she fully understood. She was like, ‘The best chance of you having a longer career in football is to take a break now. Otherwise you’ll not enjoy it for two years and you’ll stop”

GF: …and it seems to be between 25 and 30 is often when people peak. So, in terms of that we’re still so young.

Would that be different if you were paid comfortably?

SR: Yeah, it would put a different aspect on it, because you’d be doing it as well for the money.

GF:  Yeah, I was like I’m going to be so busy with uni, I’m going to need a part time job as well. I’m not going to have time to fit in football. But, if that was your job, and you didn’t have to work, then it would be different.

SR: Just cost and benefit, (thinking about) whether it was worth it or not.

GF:  And the time, the time they expect from us, and the amount they pay us.

SR:  You work it out, it’s only an hour and a half of training, but that turns into two and a half hours. Getting there, getting home, it’s your whole night. Definitely an aspect. 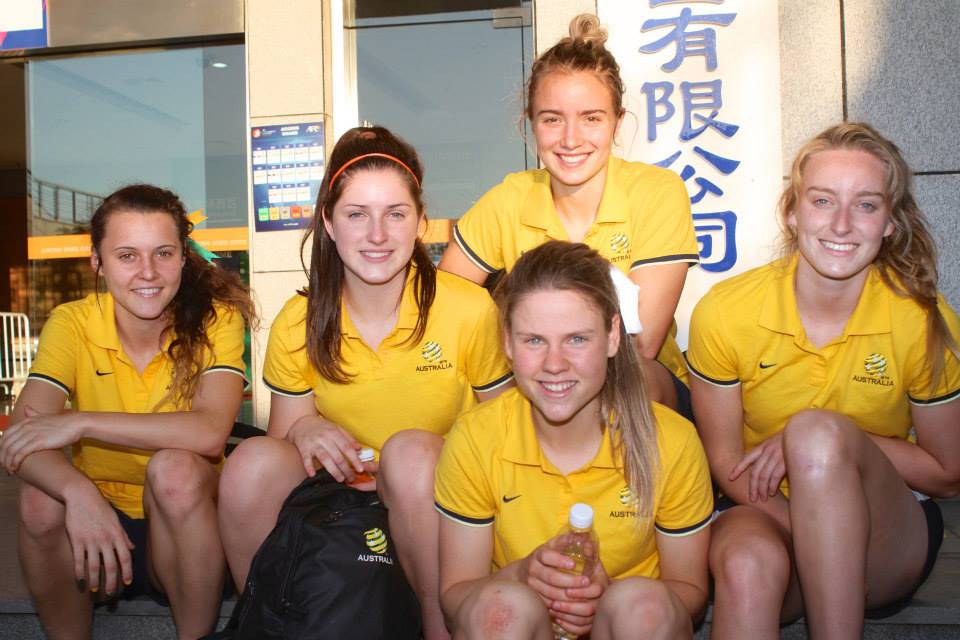 There’s been recent discussions about exposing young players too early to too much, like with some 15 and 16 year olds. What are your thoughts as two players who have been through the football system?

GF: …just need to be careful pushing. 6 years, and they'll be our age. I think, I definitely agree.

SR: I feel at that age though, we were loving football at 15.

GF:  Yeah- and you can’t be like no, you can’t play or you’ll get injured.

SR:  I think more and more people are continuing to go to school, getting degrees, rather than the older Matildas who put everything into football. I feel like if they are enjoying it and still got balance in their life. It’s just when it takes over your world I guess, it’s a bit much.

SR: For me I feel like we just went from one year to the next. You were just in academy, and then you’re in the next team and the next team. Then you go to ACTAS training, and then Canberra United, then selected for the 20s.

Not sure I had any major aspiration of playing for the Matildas, we all just went through it together, we were playing because we liked it, (and were) selected for the next team.

GF: We were always asked about goals: just want to play.