An unorthodox but no less exciting ceremony saw an emotional Maddy Prespakis take out the most prestigious award in Australian football. The only teenager to have ever won the award across both the AFLW and AFL, Prespakis has carved out her place in Australian sporting history.

It was a different feeling for the AFLW Best and Fairest awards this year, held at Fox Footy Studios, to announce the winner of the AFLW’s highest honour. Maddy Prespakis, the famous number four from the Carlton Blues joins the elite group of Best and Fairest winners alongside Erin Phillips and Emma Kearney.

The young gun from the Blues just keeps making history. She has taken out the AFLW Best and Fairest at the age of just 19, becoming the youngest player to win a league Best and Fairest across both the AFL and AFLW.

Maddy has had a massive two years in the competition after originally being selected with pick 3 in the 2018 draft. She has since been named the 2019 NAB AFLW Rising Star, has been selected as Carlton’s Best and Fairest two years in a row, and has received the honour of being selected on the All-Australian team. Twice.

Madison played all seven games for the Blues in 2020, averaging 21 disposals. In only her second season, Prespakis has become a pivotal part of Carlton’s engine room, this year helping the Baggers storm into the finals series.

Prespakis was holding back tears while being presented with the medal by her younger sister Georgie.

Talking to Fox Footy’s Sarah Jones, Maddy said she was “really honoured to take out this medal” and was left speechless.

Prespakis is an inspiration to young girls all across Australia. She proves every time she steps onto the field that if you put your mind to something, there is no limit to what you can achieve. 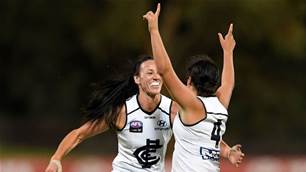 Who have we crowned AFLW Player of the Year?