Sydney FC captain Teresa Polias says she’d like to see a number of unsung heroes from the W-League Championship-winning side rewarded with a Matildas call-up.

The 28-year-old was circumspect about her own chances of making this year’s Women’s World Cup squad but had some definite views on lesser heralded stalwarts.

“It would be an honour to be included in the squad but I‘ll wait,” Polias told media the day after a memorable triumph.

“I’ve done what I can I always say do what you can control and whatever happens after that happens. We’ll see. It would be an honour though.

“I’d love to see someone like a Lizzy Ralston get a shot, I really would. She really would deserve it.” 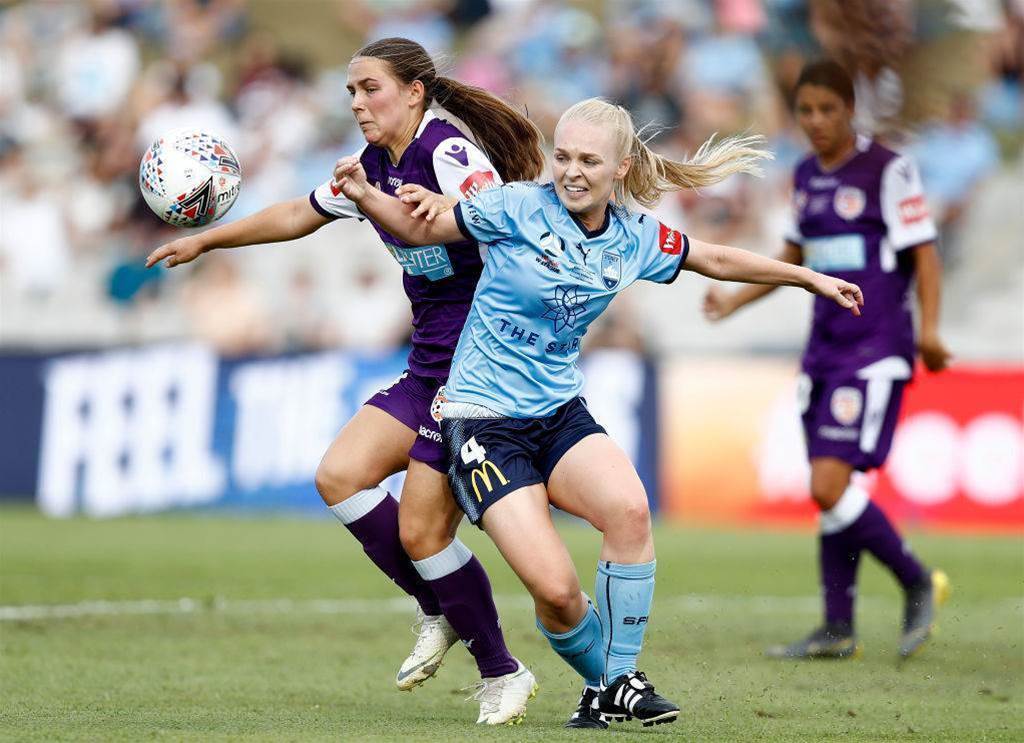 Ralston competes for the ball with Glory's Leticia McKenna

The 23-year-old has been an assured presence in the Sky Blues defence for the past six seasons and was immense, alongside an imperious Alanna Kennedy, in thwarting Glory’s attack.

“It was a huge task and we knew we had to try and contain (Kerr),” Polias said.

“I mean it’s impossible to contain Sam for a whole game and you saw her antics yesterday, she’s just incredible out of this world.

“But not just that I think she’s been able to rally the rest of her team. They’re a young team and they’ve done an outstanding job this season.

“So huge credit to our defensive line as well, they really contained her yesterday. Super proud of the whole backline they did a great job.”

Polias had a chance to review the four goals that sealed the victory and erased the heartbreak of last year’s 2-1 loss to Melbourne City in the decider.

The Sky Blues' American imports did most of the damage with Sofia Huerta opening the scoring on six minutes before player of the match Savannah McCaskill (41’, 61’) chimed in with two crackers.

In response Kerr equalized from the spot on 23 minutes before Alyssa Mautz fired home to reduce the deficit to 3-2 and set hearts racing in the stands.

But a belter from Matilda, Chloe Logarzo, with 20 minutes to go broke a six year drought for the Sydney-siders.

“It was our best game of the season. Perth brought it as well and what fantastic entertainment for our fans.”