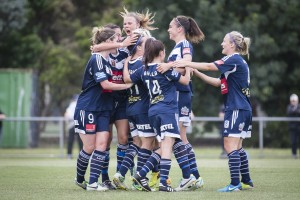 The Melbourne Victory have denied a spirited Adelaide United performance with a late Lisa De Vanna header securing a 1-0 victory in the Westfield W-League at Kingston Heath Reserve on Saturday.

It looked as if the game was going to finish in an entertaining goalless draw until De Vanna popped up on 83 minutes with a looping header from Gulcan Koca's cross.

Adelaide United, coached by former A-League star Ross Aloisi, set up in a compact defensive formation that was designed to limit the effectiveness of the Victory's dynamic playmaker Jessica Fishlock.

Aloisi's strategy was successful in the second half with United restricting the Victory's forays forward but also carving out some of their own chances on the break.

In the second half, the hosts threw more numbers forward and managed to pin Adelaide in their own half with the breakthrough inevitably coming.

Caitlin Friend had the Victory's best chance of the first half on 26 minutes when she met Steph Catley's cross at point-blank range but fired straight into the arms of Adelaide goalkeeper Melissa Barbieri.

United captain Kristy Moore had an opportunity to put her side ahead in the 34th minute but her volley was caught by Brianna Davey after being released down the right channel.

With Melbourne pushing more numbers forward in the second half, the chances came thick and fast with Swedish full-back Jessica Samuelson getting forward at will down the right flank.

Samuelsson flashed a cross-shot inches wide of the post on 57 minutes and Koca had a goal-bound effort blocked by United defender Snez Veljanovka as the Victory turned the screws looking for the go-ahead goal.

When Samuelson struck the post from close-range on 74 minutes it appeared that it just was not going to be Melbourne's day.

But their persistence paid off with seven minutes to play as De Vanna expertly guided Koca's cross into the right corner of the net.

Adelaide went all-out attack in the final minutes but several timely interventions from Davey denied them the chance to equalise.

The three points means the Victory retain top spot on the W-League ladder while Adelaide are fifth - six points adrift of the pacesetters.