Capital Football today launched their Strategic Plan 2016-19 and announced new arrangements for the future management of the organisation.

In Part 1, The Women’s Game’s Sarah Groube caught up exclusively with outgoing CEO Heather Reid AM to discuss her decision to step down from the role, her role with Capital Football from its birth and the challenges for the next CEO.

You’ve announced today that you’re stepping away from the role of CEO, Capital Football, a job you have done for 12 years. How are you feeling?

I’m not stepping away completely. I’m finishing as CEO on 30 March. We have two months to do the executive search to find a replacement. Then I’ll be contracted by Capital Football for 12 months to assist and mentor the new CEO as well as work on specific projects as directed by the Board.

There’s obviously lots going on with a facility infrastructure plan that we want to put in place, $900 000 coming back from the surplus of the Asian Cup that we want to set up a grants program for, work to be done around the Canberra United Academy getting systems and processes and communication channels set up, and we’re hoping to have a team in the National Youth League.

To assist the CEO with the complexity of the work and all of these projects, it’s a good idea to keep me around for a little while longer, without getting in their hair too much.

That’s the logistical side of things. You said you were feeling emotional… can you expand on that?

Twelve years is a long time…

If we put it in perspective, I started employment for Soccer Canberra which was running men’s football and juniors, with a loose connection to referees, and they ran the Kanga Cup.

With the support of the ACT Government and of course the FFA, we set up a Taskforce to start the integration of Women’s Soccer Canberra, Futsal, Referees and Soccer Canberra into one organisation. A lot of change was required, and a lot of pain and angst went along with it as I sat at a meeting with ACT Women’s Soccer in 2006 or 2007 when that organisation agreed to wind up.

That was emotional for me… seeing an organisation that I helped start having to wind up, but at the same time I was confident that the women’s game was in good shape and was going to get better and better under a fully unified federation.

Similarly, there have been changes with the junior league – we’ve gone through running small sided games and now it’s pretty much Mini Roos, although I’d still like to have a Mini Tildas component to it…

We started with a financial situation where Soccer Canberra was broke. We were running on an overdraft to now a turn over in excess of $4 million and it’s quite healthy.

On the men’s side, I was the one who pushed to have interchange for the men’s State League competitions so a team could have 15 players available and all 15 players would get to play. That’s made a big impact, I think, on young men and men’s participation in the sport. 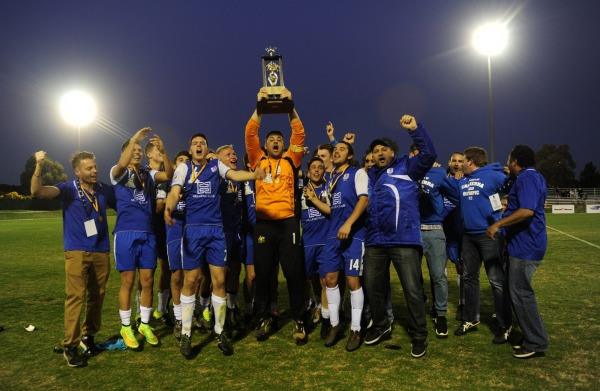 Going into the National Premier League structure where we could have sat back but we went in. It has its challenges at the moment. It’s fair to say some of the clubs are annoyed about a few things that we’re doing but we’re pushing on.

I’ve worked with six different Presidents over the 12 years, lots of Board members come and go, there’s been lots of change.

The constant has been the support from the ACT Government. Financially it hasn’t increased that much, but our relationship with the government is very strong. There’s been lots of bureaucrats and lots of ministers that have changed over that time.

Was there anything particular that brought you to this decision to take a back seat?

I’ve been talking to the Capital Football Chair of the Board, Mark O’Neill and some of the other board members about this for some time.

It’s probably time for me to have a change. I can’t sustain the pace and the workload that’s required now for one person as CEO.

I think it’s really good timing to allow a new CEO to come in and have a look at the organisation and the management structure, and put in place their own footprint to lead the organisation through the next four years.

There’s a lot going on with the infrastructure plan, futsal is an area of this sport that we want to grow and we need to give it some more attention and that requires some additional help, referees, coaching, high performance, other events… there’s always plenty to do… but it’s not sustainable for the job description that the CEO has accumulated since I first started to continue the same level that we have been.

It’s a phasing out over the next 12 months, then I’ll take long service leave and do some other work.

I want to go back and do more mentoring and leadership work, particularly with women in the sport. I’m conscious that if I’m not replaced by a woman, there’s no female in a senior leadership position within FFA’s member associations or A-League clubs, so I think it is important that as a leader I provide some extra support to women who want to learn about the challenges, the hardships, the benefits and the situation that exists for women in these kind of positions.

There’s been a lot of change in this regard across the world too hasn’t there?

We’d been playing in Taiwan in invitational tournaments from ’78 and in the ‘80s, then FIFA gave us the pilot World Cup in ’88, then the first World Cup in 1991. That’s only 25 years ago.

But in 25 years, when FIFA embraced the world game for women, and recognised the marketing and commercial opportunities and point of difference it could give our sport over any other sport, we’ve had World Cups, under 20s, under 17s, and Olympic Games. Now we even drill into that whole Asian market which is just huge and complicated for qualification.

I spoke to somebody today about the money that women can make in the sport and I think we need to recognise that women aren’t just making money being a W-League player, they’re making money by being on the national team roster, the W-League and going overseas. They now have three or four components to how they can make money as an international player, and they shouldn’t just rely on a payment as a national team player.

When you get a player like Lydia Williams who can get paid to be in the Matildas, Canberra United, and Houston Dash, that’s not bad. She’s probably earning over $100,000. It’s not the same as men, but it’s a hell of a long way down the track from where they were 10 years ago.

Where will the sport be in 10 years time? I don’t know, but let’s hope it’s onward and upward.

What do you think the biggest challenge for the next CEO is?

There will need to be some stakeholder engagement and relationship building with our premier league clubs. We are, to be honest, in a fairly tense situation with club presidents. A lot has to do with the introduction of the re-branded Canberra United Academy.

There’s uncertainty but also naivety around decision making and who makes decisions for the organisation – I get blamed for a lot of the decisions where I actually deliver the decision that the Board makes, or it’s on recommendation from an Advisory Committee to the Board and I deliver it.

We’re seeing some tension that suggests that our premier league clubs, of which there are 8 out of 47, would like to be represented on the Board, and they would like to call the shots. That to me is going backwards. We were in that environment 12 years ago when every club had a vote. Now we have a different decision making structure where we have members that represent the clubs and the regions - it’s those members that vote on behalf of the clubs.

Why should just the premier league clubs get a vote, if we go down that track again. What about the community clubs, who make up 80-85 per cent of our participation numbers. That’s the big issue for the new CEO.

Also, looking at the management arrangements, and seeing if we’ve got the right structure and the right people in the right positions. Personally I don’t think there’s much need to change the structure.

Thirdly, the relationship with the Board will be critical to develop because the CEO reports to the Board and takes direction from the Board. The AGM on 30 March will be an important date in that sense.

There are two Directors who have to re-stand for a position. If they are changed there’s a new familiarisation process that has to take place.

The Strategic Plan is a high level plan.

It’s based around four pillars:

Culturally, what type of legacy do you think you’ll leave with Capital Football?

I’d like to think that it’s much more inclusive and accepting of diversity.

If we go back 20 or 30 years ago, women playing the game was still seen as a bit of a novelty, the old kick-and-giggle, we weren’t taken that seriously, but I think now the way in which the sport has embraced women’s participation is fantastic and I’m really comfortable and confident knowing that things will continue because there’s full commitment from the Board, and there’s full commitment from the staff and the members, to maintain and grow the women’s game.

It’s the same as our cultural diversity in regard to ethnic diversity. When I first started there were major issues when certain clubs played each other. A lot of that has changed. We’ve stamped out a lot of that poor behaviour based on ethnic or cultural backgrounds. While it’s still not without it’s problems in some of the big games between big clubs - you get that anyway, it doesn’t matter about the ethnicity of the participants - but I think we’ve shifted that quite a lot from 5 to 10 years ago.

I think a lot of that has got to do with the FFA ‘re-starting’ the A-League, putting on hold the old National Soccer League (NSL), and the way certain clubs got into the national league, and moving to a one team one city approach. In Canberra we’ve been very tough on bad behaviour. I’d still like a lot more rigour around people behaving badly, especially as spectators, but I think the inclusiveness, the diversity, and the acceptance has really changed a lot.

I remember one of the first days I started, one of the Presidents of one of the clubs came into the office and was asking to speak to the new CEO because he was “going to tell him what needed to be done to be fixed”.  Somebody said “Well, you can tell her because she’s standing behind you.’ He was all apologetic.