Thirteen may be unlucky for some but for the Australian Dolphins as they took home 13 gold medals on the opening night of the Pan Pacific Para Swimming Championships in Cairns.

Youngsters Paige Leonhardt and Keira Stephens showed they are ones to watch in the future with Leonhardt taking out the gold in the women’s 100m breaststroke SB8, ahead of Stephens and teammate Madeleine Scott.

It was Lakeisha 'Lucky' Patterson who won the first gold of the night after swimming a personal best time of 4.39.23 in the Women’s S8 400m freestyle while Ellie Cole also took home gold in the S9 400m freestyle.

It was also a night where world records fell as Canadian Aurelie Rivard broke her own record in the 400m S10 Freestyle, which she set back at the Rio Paralympics, in a time of 4.29.87.

She hit the wall ahead of Australian Monique Murphy and 13-year-old Jasmine Greenwood.

While in the S13 classification, Katja Dedekind won silver in a time of 4.49.10 with American Rebecca Meyers breaking her own world record to take gold. 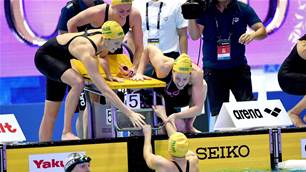 Golden night in Cairns and Tokyo