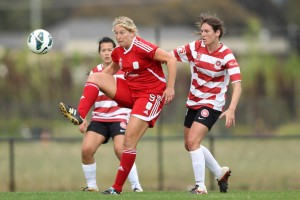 I had many different thoughts running through my head prior to arriving back home in Adelaide. I was eagerly waiting for my Swedish adventure to come to an end as I knew that something special was waiting for me back at home.

After a long six month stint away, I was finally back and boy I couldn’t wait to get out there.  I couldn’t wait to meet all my new and old teammates. I had been getting regular updates about how hard the girls were working and I had wanted to jump on the next plane and join them.

I arrived back home on the Wednesday morning and all I could think about was training that night. I was definitely nervous and excited about what I was about to join and be a part of. I realized that I had to meet and introduce myself to 6 new players.

This can always be a little daunting, as you know either little or nothing about them. But you just let the football do the talking. The squad had many new faces mixed with some old but the feeling and vibes I was getting were very different to the previous years. You could see it in the girls and how they went about their training.

Thursday night we had a trial game against the South Australian U14 boys development squad. It was a real eye-opener for me as I could see how far the team had come.

The girls implemented, for majority of the game, the way we want to play football. There is always room for improvement but just witnessing and playing in that game, the W-league season couldn’t come quick enough.

We had a good week on the training field prior to our first game against the Western Sydney Wanderers and we knew exactly how we wanted to play.

We knew that if we could perform on game day the way we have been training, we would surprise a lot of people and come away with 3 points.

It was finally upon us and what a day it was. The Lady Reds, as of Saturday [20 October], had 80 members and hopefully we have many more to come.

The girls I thought started off well trying to play our game but after the shock of two well-taken free kicks, we needed to stay calm and not panic. We knew it was “our time to shine” and that in football anything can happen. Credit to the girls as they continued to stick to the game plan and we got one back before half time.

The second half was underway, against the run of play, the Wanderers scored again making it 1-3. With the "Never Say Die" attitude, we pulled off what many people would have thought as impossible. 3 goals in 11 minutes, a great team effort plus some individual brilliance from Macca [Sarah McLaughlin] with three classy finishes.

You could not have scripted it any better.

There was a point in the game where we had a chance to group together.  It was 3-3 and the words from the Skip (Abby) rang through to us all.

This is our time to shine! They are on the back foot. Just keep the pressure up. We are coming away from this game with nothing but 3 points. There are 10 minutes to go and this is exactly what we have been training for.

The feeling after that final whistle was amazing. You could see the pure happiness and joy throughout the team, officials and spectators.

What an unbelievable feeling it was and a proud moment for all to be a part of. We had 11 bodies out on that field with ONE heart.

This is only the beginning, and there is still a lot of hard work ahead, and we know this, but it was definitely a step in the right direction and a great way to start the season off.

The Lady Reds are raring to go for the rest of the season.