One option is to follow the Spanish League's decision to promote from the second tier with no relegations for next season only.

The original FAWSL had a goal of up to 14 fully professional top division teams.  Having only a promotion to the FAWSL with no relegation down could be a method to get closer to that from the current 12 teams in the FAWSL.

There is also the question as who to declare the winner of the season.  When the season was suspended Manchester City lead the league with 40 points, with Chelsea FC one point behind with 39 points and Arsenal FC in third place with 36 points.

However, both Chelsea FC and Arsenal FC had a game in hand.

One method of declaring a champion could be to award the places by points per game ratio. With this calculation, Chelsea FC would win the season with City in second place and Arsenal keeping their third point.

Perhaps more important to clubs though then a 2019-20 season winner are the two teams who claim next season's UEFA Champions League spots.  It is questionable whether Arsenal FC would be satisfied to miss out when the top three positions are so close.

Importance of looking ahead

Women's football has made leaps and bounds in the last few years, especially in England which for years seemed to be behind the curve in terms of professionalization and participation.

As the COVID-19 pandemic associated financial crisis will have an impact on women's football, like all other industries and sports, ensuring that the gains in professionalization and participation are not lost is primordial.

The English FA, therefore, has the dual difficulty of finding a method of ensuring that the next season it is of the FAWSL and the FAWC can go ahead safely while ensuring the financial long term viability of both leagues.

This will require preparation and coordination. Getting properly ready for 2020-21 should be the focus at present.

This would better ensure the long term of the women's game in England instead of the short term problem of a season already written off as a foregone conclusion. 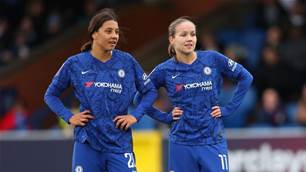