South take on Bulleen Lions on Sunday in the NPLW VIC Grand Final at AAMI Park (3.30pm) as part of the triple header with the men’s promotion-relegation playoff and the men’s Grand Final.

Gummer said it was important for the women to get the exposure, but was hopeful there would be a day devoted to the women’s finals in the near future.

“It would be really good to have the U12, U14 and U19 Grand Finals all played on the same day, so we can make our own brand,” Gummer told The Women’s Game.

“The triple header is a great idea in getting the promotion, but I think it’s also good to hopefully develop a sole day for the girls eventually.

“We’re at the promotion stage and we need to keep getting the media attention. Right now I think it’s an excellent idea to have it before the men’s final as it’ll be a huge crowd there, so hopefully the crowd gets behind us.”

The left-back has just played her second season for South and enjoyed winning the Championship last season after beating Geelong Galaxy on penalties in Broadmeadows.

She said the standard in the NPLW has increased over the years, but feels it still had a long way to go.

South topped the table this season with 63 points while the bottom five did not score over 40 points and wooden-spooners Southern United were winless this season.

“The standard in the NPLW has increased, but even know you can still see there’s a huge gap from the top and bottom teams," she said. 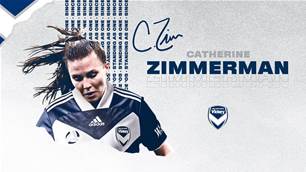