After a heart-wrenching loss to Fremantle in round one, Melbourne have nabbed their first win of the season over a disappointing Collingwood side that failed to snare a goal until late in the final quarter.

With over 7000 keenly watching from the well-populated terraces and bleachers of Victoria Park, Collingwood attempted to subdue Melbourne’s dash from the opening siren, with blustering winds aiding their cause.

Just last week, Melbourne and Fremantle ran each other stupid in bakingly hot conditions. Today, Melbourne’s leash on the wings and flanks had been tightened – thus, the two sides clobber into each other in the clinches for much of the first half.

Ash Brazill, however, will not be confined. Melbourne’s class is clear when the ball flies free of congestion, yet as they fly inside fifty it is often Brazill who snags the football and dashes the other way, neon-orange boots a blur. But for all her pizazz, the Pies had just two behinds until late into the last quarter.

The wind traps the football in dead pockets and tightens congestion until, eventually, O’Dea snapped a footy out of congestion and for all of Melbourne’s attempts to establish a flowing run, it is an opportunistic punt that hands Melbourne their first.

It is only moments later when Lauren Pearce snatches a chest mark from Tyla Hanks’ spearing drop punt and doubles the goal tally.

Collingwood held and denied but their deficit was 14 points at the half. Brazill’s half-back flashiness their highlight, but her Pies lack too much in their midfield and forward line. Melbourne’s O’Dea had 18 disposals and a goal, leading a powerful midfield on a romp.

The third started with Tegan Cunningham taking to the air better than Qantas ever will, a tattooed wing tearing through the skies.

Opposed to undersized debutantKatie Lynch, Cunningham’s aerial prowess allows a ping at goal for Kate Hore, but her set shot slid right. Collingwood, however, embed the pigskin in their forward fifty, rolling into a myriad of stoppages before Harriet Cordner galloped out of the back pocket and allayed Melbourne’s stress.

Lauren Pearce should have had two at the third quarter’s end after Erica Fowler edged over the mark, but Melbourne’s ruck handpasses on the siren before the mark is set. 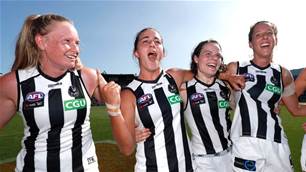