The use of the Video Assistant Referee (VAR) at the FIFA women’s World cup this year causing controversy among players and fans.

Every time the system has been used the result is always labelled as ‘contentious’ no matter how you interpret the rules.

While there is always unrest surrounding the introduction of new technology on sporting grounds, there are still some bugs that need to be fixed for the system to be accepted by the footballing world.

The introduction of the VAR system has slowed the game down considerably.

The constant reviews mean teams can no longer gain an advantage by a quick play of the ball and often a call will come long after the offence was committed.

This was especially evident in Australia’s opening match against Italy when offside decisions were frequently made after the defence had chased back and got the ball out of play.

Matildas staff said these late calls may have contributed to injury concerns for Clare Polkinghorne after the centre back had to sprint back to cover an offside player. 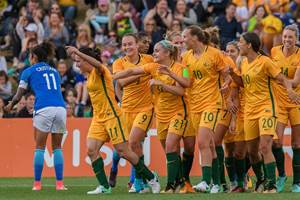 The flow of the game is also greatly impacted by the amount of time it takes for a decision to be made on whether or not to review a play, let alone the time for review itself. Pauses like this disrupt the players' rhythm and can cause potential fans to become impatient and disinterested.

Especially if they do not understand what is happening, the time and frequency of these reviews will cause fans to change the channel.

Perhaps one of the most contentious uses of the VAR system comes during penalty kicks. On no less than four separate occasions this world cup, penalties have been reviewed and retaken because the goalkeeper has come off her line.

A sensitive issue for many Matildas' fans after our exit from the Olympics in 2016. However, these offences are not as explicit as those in Rio. In most of these cases, the keeper is centimetres off their line and only milliseconds before the ball was touched.

It is apparent that these penalties would not be retaken if it weren’t for VAR as the offences are unseen in real time and only revealed in frame-by-frame analysis.

Much of the controversy has come from inconsistent calls and a lack of understanding regarding the rules. In saying this, VAR has not changed the rules of the game, rather it has exposed the rules that need to be adjusted.

It is evident that the use of technology such as this is an important part of the future of the game.

However, it is also clear that VAR and the officials using it need more training to make it more effective. Perhaps new systems need to be trialled in national leagues rather than on an international stage.