Only 21, the hard-hitting midfielder is set to play a substantial role in Craig Deans' squad this season as the Jets prioritise their renowned academy set up.

“With the departure of Emily [van Egmond] from the Club, Clare was the obvious choice to step into the leadership group,” Deans said.

“Clare’s a player who rarely misses a minute for us, she’s super consistent on the park, and off the park, she’s a fantastic influence amongst the playing group." 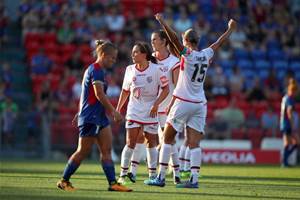 Newcastle Jets have lost their hometown hero and they've already announced they won't sign any domestic or international stars. So why is one of the league's most experienced coaches so happy?

Deans' side will also rely heavily on Davis and Simon, who return to the leadership group as co-captains, but with greater responsibility after the departure of Van Egmond.

Newcastle showed a lot of fight to recover from a poor start to last season, endearing some hope that despite rampant youth throughout the side, they're not just here to make up the numbers.

“Add her into the mix with Gema and Cass, who are experienced players and leaders in our squad," Deans continued.

"It bodes well for the season ahead.”