With all she has done in her football career, it's easy to forget that it's only been six years since forward Sam Kerr kicked her first football in earnest.

With all she has done in her football career, it's easy to forget that it's only been six years since forward Sam Kerr kicked her first football in earnest.

In that time frame the 19 year old has already played 25 times for the Matildas (Australian WNT), won an Asian Cup (including scoring Australia's goal in the final), played in World Cup and won a W-League Championship with Sydney FC.

This W-League off season the West Australian born footballer travelled another path in her football odyssey with a stint at the Western New York Flash in the newly formed American National Women's Soccer League (NWSL).

Playing 19 of the 22 games, finishing third in Flash scoring and second in assists, the "rookie" Kerr has had a stellar season to help them to the regular season title and runners up in the Championship.

We caught up with Sam in New York as she reflected on a season of firsts.

Upon your move to the USA, what were your expectations of the WNY Flash and the NWSL?

I hadn't played overseas before so it was all new to me. Once I got over here the organisation was as professional as it can be.

It was a good first overseas league for me and I think it is a league they are going to try and build on. I have been enjoying my time here and the Flash have been nothing but good to me.

You had come off a championship winning W-League season with Sydney FC, how well prepared did you feel going into the NWSL?

Obviously it was good to have a strong season in the W-League but coming over here it was a whole different game.

I didn't really expect to play much and was just hoping to come over and get a bit of experience and hopefully a little bit of game time. After the pre-season things kind of changed and I am very grateful for the opportunity I got to play and I have loved it.

[quote]To be able to come over here and have just come off a hard W-League season, that is perfect for us as it just gives us that little bit of an edge in fitness level and game sharpness.[/quote]

When did you start to feel comfortable with your role within the team and up to the pace of the NWSL?

Probably the fourth game I really felt I was up to the same match fitness as the team.

I think the first game I only played 45 [mins] and I was a bit tired and came off, and then the next game I played 65. By the third game I was playing a little bit longer and then I kind of kept my spot at playing around 75 to 80 minutes throughout the year.

They play a different type of game. It's a bit quicker and a little bit more running but nothing that I couldn't adapt to.

How do you feel you progressed during the season and what changes have been wrought on your game?

I guess I have just grown as a player. It's obviously a plus for me playing with people like Carli [Lloyd] and Abby [Wambach] and every one of the girls in the team. They are just willing to help you learn.

I have only been playing the game [football] a very short time, this is my sixth year, so it's still very new to me and I am just learning more tactically. I think I have learned a lot of things off the ball this season. 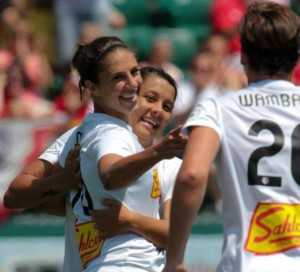 You mentioned Abby Wambach and Carli Lloyd, what are you learning from them, and others in the team, about what it is required to be a professional footballer?

They are all very different. Abby is more of a laid back, "gets the job done" professional. Carli is a very full on professional and McCall [Zerboni} is just a pure leader. So I have learned a little bit from every one of them, along with my other 20 teammates.

They have been great and obviously they are people I look up to so it is great to able to play with them and have such good bonds with them on and off the field is really helpful to me.

There were a number of Australians in the NWSL and you all adapted quickly. What is it about the W-League and the Australian system that helped you all become key components of your teams?

I think the standard of the W-League is just increasing every year. The first year there were two good teams and the rest were average. Last season, as we all saw, there were six teams fighting it out for the Top Four positions.

I think the league is setting a higher standard each year which is perfect for us because that is something we need. We need hard 90 minute games week in and week out.

To be able to come over here and have just come off a hard W-League season, that is perfect for us as it just gives us that little bit of an edge in fitness level and game sharpness.

You spoke about learning from seasoned professionals, what are you going to bring back with you to W-League?

I think the biggest thing for me is that I have learned how to take care of my body; how to prepare. So it's more off the field things. There are obviously a few on the field things but I have really learned a lot about preparing, pre-hab and rehab and doing the extras that you need to be able to perform to your highest level each week.

Your first long stint away from home overseas, how have you enjoyed the experience off the field?

It's been good. I have a great bunch of girls in my team and I couldn't have asked for a better group.

Not only have I got to see the US but I have got to see Canada being so close to there. Having other [Australian] girls in the league means I have stayed in New Jersey with Caitlin [Foord], gone and travelled around Boston with Kyah [Simon] so I have got to see a bit off the field.

But also when we play in different cities like Portland, that was amazing. All the cities we play are really cool and it's been great to see other parts of America that I would never think to go to other than New York or LA.

What have you enjoyed the most the last 6 months?

Enjoying life outside of football