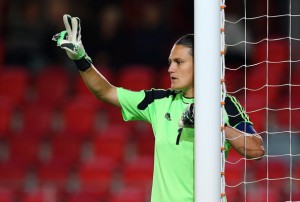 At club and international level, there is very little in the world of football that German captain Nadine Angerer has not won.

So what is the next challenge for the footballer who has done almost everything?  The W-League with the Brisbane Roar.

Arriving in Brisbane earlier this month, Nadine Angerer has been settling into what will be her home for the next five months and so far she likes what she sees.

“I love it actually,” she exclaimed.

“I play in a very nice team and they make it very easy for me to feel at home.”

“I like the club. I like the country, I like the people; they are very open people who have made it very easy for me to come here.”

A change of scene

Whilst on a mid-season break with Butt, who joined Angerer’s FFC Frankfurt in February this year, Angerer raised the possibility of leaving Germany and Europe for a couple seasons.

When the goalkeeper was quizzed on possible destinations, the USA and Australia popped up in the conversation.

As quickly as W-League and Matildas fans have come to expect, Butt seized the moment and went for goal.

“She [Tameka] was really enthusiastic about the Australian league,” remembered Angerer.

“She told me so much positive things about it and of course I get interested.”

“Then she said she had to force me to play for Brisbane Roar of course,” she laughingly said.

That was it. One of the world’s most decorated footballers was heading to Australia.

In her 13 year club career German legend Birgit Prinz only played one year out of Germany, as did Ariane Hingst before she joined the Newcastle Jets and Canberra United, Kerstin Garefrekes has never played for a non-German club and Angerer herself has only played one season abroad and that was in nearby Sweden.

So why the move now?

“In Europe we kind of all have the same style and our mentality is quite similar,” Angerer explained.

“So I wanted to know how other countries are practicising.  I wanted to have a different experience of soccer.” 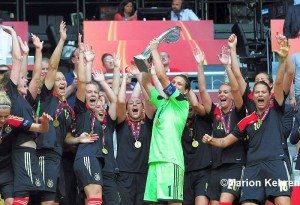 The 34 year old becomes the second German to play in Australia after Hingst, although she didn’t converse with her long time national teammate about the W-League or Australia.

“If go somewhere I don’t want to know that much about it.”

“I like to make my own opinion, my own experience about things and I don’t want to get influenced by opinions I got before.”

A year of firsts

Despite her 17 year and 125 game international career, 2013 has been a year of firsts for Nadine Angerer.

It was a tournament where many predicted  Die Nationalelf would finally be knocked off their perch as European champions.

Key injuries to key personnel pre-tournament forced coach Silvia Neid to throw in many players from the German U20s side and it was up to Angerer, as captain and the elder stateswoman of the squad, to keep it all together.

“It was an exciting tournament and it was a special tournament for me as well.”

“Of course because of the success, that’s one thing but the other thing was that we played there with a very, very young team.”

That the Germans took out the tournament, their 8th overall and 6th in a row, Angerer considers it one of her greatest achievements in a career that has many.

“I am the oldest player and together with other older players we really had the responsibility to keep the team together.”

“That is one side and on the other side you have to be focused on your own performance.”

And that performance was spectacular.

Although only 5’9, Angerer is a towering player on the pitch and she mustered all of her experience to help Germany suceed.  Two performances stood out for different reasons.

First she demonstrated her leadership and organisational skills in the semi final against hot favourites and hosts Sweden then she produced two world class penalty saves and a commanding performance in goals to assist Germany in holding off Norway 1 – 0 in the final.

“In the end it was a fantastic tournament.”

“We didn’t win the tournament because we were the best team but because we had a great team spirit.” 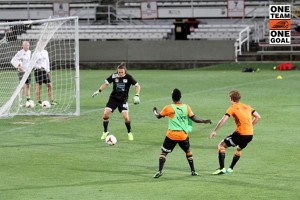 Joining in at the A-League team's training | Credit: Brisbane Roar

Bringing success back to Brisbane

It’s been two seasons since Brisbane Roar have won the W-League championship and last year the team missed out on the grand final for the first time in their history.

In Roar terms, two years since a championship is a lifetime and they are hoping the addition of Nadine Angerer will be the final piece of the puzzle.

“I have been here only for a short time but I have very positive impressions,” she said of club, team and coaches.

“My part will be to keep the team secure and for them to know they have a goalkeeper they can trust.”

The goalkeeper has already impressed beyond her W-League teammates.  Spending several sessions training with the A-League side, the same team countryman Thomas Broich stars for, Angerer has already gained admirers.

"It's fantastic to have a German international train with you - her handling is unbelievable," Roar goalkeeper Michael Theo told The World Game.

"It's great just to have her presence. She surprises me every day, she's amazing.”

While football is her priority, a keen diver, Angerer is also looking to make the most of the Australian summer and take advantage of Queensland’s beautiful beaches and marine life.

But make no mistake, in keeping with Brisbane's mantra this season, Angerer has only one goal.

“I am not here to make vacation for months,” she stressed.

“My main aim is to win the league with Brisbane Roar.”

Brisbane Roar kick off their season against Canberra United on 9 November 2013 at AJ Kelly Fields.