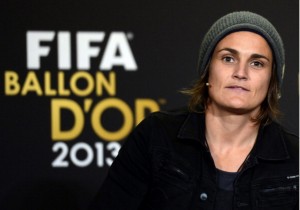 It is Angerer's first award and the first time a goalkeeper has received this recognition.

Angerer was a dominant figure in Germany's eight UEFA Women’s Euro win in Sweden with the German captain the cornerstone of Silvia Neid's young team.

Her phenomenal ability was in display in the final when she saved two penalties against Norway assisting Germany to 1-0 win.

Her performance was a key factor in Angerer being awarded the UEFA Player of the Year in June 2013.

Angerer's German Women's National Team coach Silvia Neid was also rewarded for their Euro success with the 2013 FIFA Women's Coach of the Year, her second such award after being crowned in 2010. 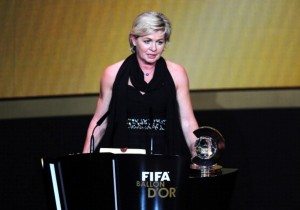 Silvia Neid with her second Coach of the Year award | Credit: Getty Images

Angerer also used the awards press conference to announce that she will be joining the defending champions Portland Thorns for the 2014 National Women's Soccer League following her season with Brisbane Roar.

“It is with great pride that I look forward to joining the current U.S. champion club in Portland and I hope I can contribute to another successful season for Thorns FC,” Angerer said.

“I am excited to play for a team with many of the top women’s players in the world.

Speculation had been rife as to which team had acquired her services since her announcement in September 2013 that she would be playing in the NWSL with Portland growing as the favourites on the back of rumours swirling prior to last week's NWSL expansion draft.

Angerer is due back in Australia this Thursday ahead of Brisbane Roar's big clash with defending W-League champions Sydney FC.

Nice for FIFA to have Mia Hamm there. She presents Nadine Angerer World Player of the Year. Tough choice with Euro only major '13 tourney.

Congrats @NAngerer world player of the year. Never in doubt!

Huge congrats to @brisbaneroar goalkeeper @NAngerer on being crowned the 2013 FIFA Women’s World Player of the Year. #BallondOr

Huge congrats to @brisbaneroar goalkeeper @NAngerer on being crowned the 2013 FIFA Women’s World Player of the Year. #BallondOr

Nadine Angerer totally deserves her award. Player of the Year by a long way in my opinion. #BallondOr

Real surprise was Nadine Angerer winning. First GK to ever win the award--male or female. Great to see as a fellow GK #represent #BallondOr

Lucky enough to be training against the worlds best keeper. Congratulations @NAngerer on winning the FIFA player of the year !

So privileged to be training with the best keeper in the world! Huge congratulations to @NAngerer very well deserved! 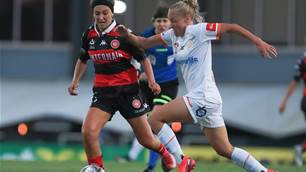