The referee has blown the whistle and extra time has expired with both teams still tied up.  How will the victor be decided?

The referee has blown the whistle and extra time has expired with both teams still tied up.  How will the victor be decided?

With the heart pounding, dramatic, and often times cruel form of penalty kicks.

One penalty shootout every few years is enough for a footballer’s heart to handle let alone two in the course of one summer.  But this was exactly where Alanna Kennedy found herself.

The first game coming against Brazil in the 2016 Rio Olympics.  Brazil was up 7-6 on penalties when Kennedy stepped up to the spot to take her shot.  She kicks the ball towards the right side of the goal only to have the Brazilian goalkeeper outstretch her arms to make the save.  Brazil has won the game and Australia’s time at Rio Olympics is over.

Fast forward eight weeks to the NWSL Championship where Kennedy and the Western New York Flash have finished a game tied with the Washington Spirit.  The Flash are up 3-2 and if the Spirit miss their next shot then the game is over.

But if the Spirit are able to score then Alanna Kennedy would be next to take a kick and hope for a different fate then in Brazil.  We’ll never know if Kennedy would have been able to have the storybook ending of redeeming her missed penalty since the Spirit ended up missing their shot. 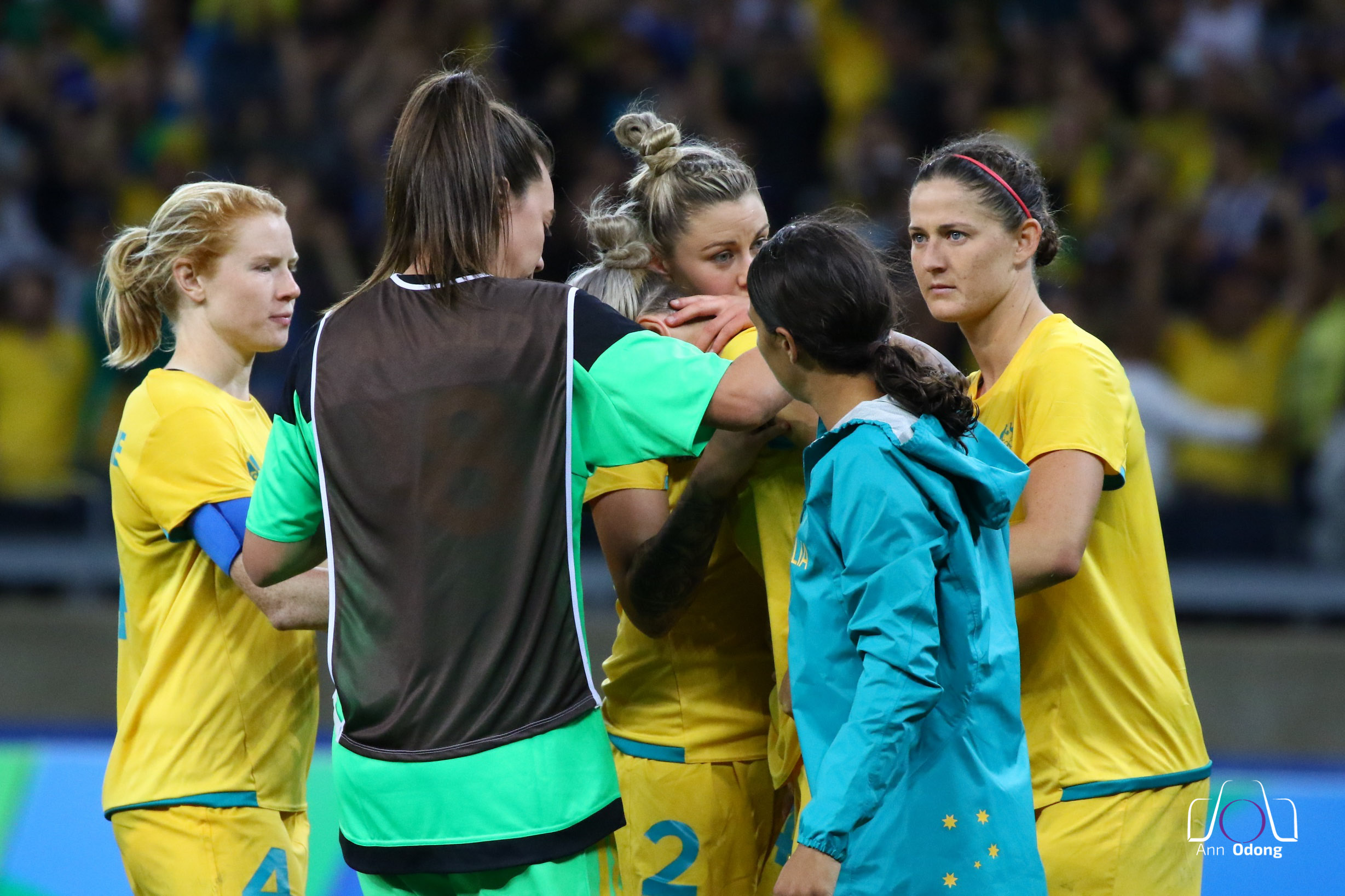 Kennedy consoled by teammates at the final whistle

But if you ask Kennedy about it she’s okay with winning the NWSL Championship without taking a penalty, but what happened in Brazil is something she won’t be able to forget.

“For me having people write to me on social media and all of that had put the thoughts of redemption in my head, but I guess nothing will ever really heal the wound that happened in Brazil.”

“It was nice to win and it was a nice feeling.  It doesn’t replace what happened in Brazil, but it was a weight off my shoulders although I didn’t take a kick.”

Playing with the Flash this past season was a memorable experience for Kennedy, but it didn’t come without its challenges.  Her first experience of playing abroad new everything; a new city with new teammates and coach and a new league with a new playing style.

“For me personally, living in Buffalo was hard to get used to at the start," said Kennedy.

“I am from Sydney which is a big city and it was very different for me.  But I think the team morale that we had at the Flash made everything easier.  It was a little bit of a struggle in terms of the city, but I enjoyed seeing the girls.”

Another challenging factor was the lack of belief in the team outside of the organization.  Heading into the 2016 NWSL season, the Flash, a team who had won titles since its inception, were written off and dismissed by many pundits.  The club that was once the home to Marta, Christine Sinclair, Alex Morgan, Caroline Seger, Abby Wambach, Carli Lloyd and Sam Kerr, now had a stigma around them as the team no-one wanted to go to.  Kennedy said being written off only added fuel to their fire to win.

“We played several games and it wasn’t until we won that people gave us a little bit of respect.  It was frustrating at times knowing that we had proven ourselves, but I don’t think it affected us at all.”

“We are a young team that were able to brush things off easily.  We were determined to prove people wrong and make our mark.”

Kenndy is hoping to continue the winning ways of the Flash into Sydney FC’s W-League season.  It hasn't been the best start with a loss to Brisbane Roar but then again the opening game of Season 8 started with a crunching loss.

“We haven’t written down team goals, but being at training and being around the girls I think our goal is to be as aggressive as possible.”

“Our approach is being aggressive and coming out round one with setting the tone for the rest of the season.  And hopefully going one better than last year, having lost in the grand final.”

The grand final loss was one that the Sky Blues players took to heart and Kennedy was no different.  In particular as it was the 21 year old's second straight Grand Final loss after missing out with Perth Glory the previous season.

Unlike with Perth Glory, Kennedy this season is looking to remedy the loss after she re-signed with the Sky Blues.  It will be the first time since 2010 that the central defender has been on a team for consecutive years.  Being from Sydney and the overall atmosphere at Sydney FC made the decision to stay easy for Kennedy.

“I guess when I was younger I jumped around trying to give myself the best opportunity.  I think my stint in Perth was more of a case of me wanting to enjoy a season with my friends and living away from home.”

“I always knew I would end up at Sydney, its home for me.  I think now I’m not as young and I have a few more priorities.  I’m enjoying being at home and I’ve got things going on here.  It just worked out and Sydney is a club I have a lot of loyalty to.”

Finally at home after close to nine months away Kennedy, who is close to her family, is more relaxed and able to look back on her first season away.  Although closing in on 50 Matildas caps, 2016 was the defenders' first look at an international league.  It was also an opportunity to gauge her development and that of the W-League.

Having 32 players playing in both the NWSL and the W-League there is a lot of comparisons between the leagues.  However, Kennedy still would like to see some improvements made for the W-League to keep up with the NWSL.

“The gap is slowly closing between the leagues, but in America, myself and the rest of the team will, for the most part, train and then get ready for training the next day. Whereas in Australia, they train and they go to school or they work all day, and that’s just the unfortunate thing as professional and amateur footballers in Australia.”

“It’s our passion and you want to be able to give your all to it, but I don’t think that is possible when we have girls having to exert their energy elsewhere.”

“The league is growing, we’re getting more and more internationals of higher caliber.  It’s great to see a lot of Americans over here and the quality spread out amongst the teams is great to see as well.”

“In the first couple of seasons it was Brisbane and Sydney we’ll see you in the final. Where now it’s unpredictable, you don’t know who is going to be in the final.  I think that is how the league is taking steps forward.”

Kennedy not only wants to see the W-League continue to grow, but she is hoping to continue to grow as a player this upcoming season. She wants to take everything she has learned from the Matildas and Flash from the past year and apply it to Sydney FC.

“Personally, for me the older I get and the more experienced I get with the Matildas I feel like my position on the field requires a lot of leadership and that is more of a role that I will take this year.  My goal this year is to grow as a leader and to improve every aspect of my game.  Growing as a player, there is always room for growth and I always want to be doing that.”

The heartbreak of Rio and the resiliency learned with the Flash will certainly carry over to Kennedy’s play for the upcoming W-League season.  And who knows maybe we’ll see Alanna Kennedy participate in her third penalty shootout this year.