Winless Wellington Phoenix are learning the hard way after another tough loss in the A-League Women and the imposition of disciplinary action on three players.

Following another heartbreaking loss A-League Women debutants Wellington Phoenix are trying to avoid panicking after they take the lead.

For the second time in their last three games, Wellington carried a lead into the second half after scoring twice in the first 45 minutes, only to end up losing 3-2.

It underlined the sharp learning curve the newcomers are experiencing.

Perth Glory scored twice after the 80th minute on Monday evening to leave last-placed Wellington still winless after nine games, the last eight of which they have lost.

While acknowledging Monday's match represented a missed opportunity for her side, Lewis took a number of positives from the game.

The plus points included scoring two goals for just the second time this season, the way her side pressed, especially in the first half, and a good first start from Australian midfielder Hannah Jones.

"I don't want them to walk away from this game and completely feel like they threw this away," Lewis said.

"There was really good things, but we need to start to put it all together otherwise the wins are probably never going to come if we can't piece it all together."

There was a lesson learnt off the field for three young players, Isabel Gomez, Te Reremoana Walker and Jordan Jasnos, who were not considered for starting selection after breaching team COVID protocols.

"Its just a learning experience for them, its not a massive deal," Lewis said.

"It's one of those things where they had to be accountable for their actions and now they've learnt from it and we are all going to move on."

Exciting teenage midfielder Alyssa Whinham underlined her potential by setting up a goal for Grace Jale with a glorious pass, but to the surprise of onlookers she was substituted after 78 minutes.

"She is carrying a bit of fatigue, so we were actually expecting to take her off a lot sooner in the game," Lewis explained. 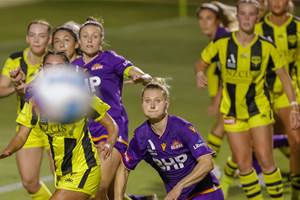