Young Matilda Melindaj 'Mindy' Barbieri is set to be sidelined for the next 12 months.

The midfielder, who played with Melbourne Victory in the recent W-League season, has announced on Instagram that she has suffered an anterior cruciate ligament injury.

"Rumour has it that on Tuesday the 23rd of July 2019 I’ve joined a club, I can confirm today that I have indeed joined the ACL Club," Barbieri wrote.

"I’ve accepted the challenge and journey for a big 12 months ahead! Time to bring on the hard work!

"I would like to take the time to thank everyone for their kind messages, support and good luck wishes."

Barbieri was part of the Young Matildas team which qualified for the 2019 AFC U19 Women's Championships later this year, a tournament which acts as qualification for the 2020 FIFA U20's Women's World Cup.

The 19-year-old also scored in the teams 11-1 win over Nepal in the second stage of qualification. 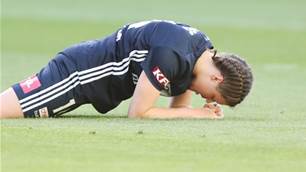