PHOTO: Emma Checker one of the standouts at centre back |  Credit: Emily Mogic / emilymogic.com

PHOTO: Emma Checker one of the standouts at centre back |  Credit: Emily Mogic / emilymogic.com

Last season, Melbourne Victory had the very best defence in the W-League.

Without question, they were dependable, worked well as a team and were just about impenetrable. Their opponents averaged a smidge over a goal per match. Fewer than any other team.

Roll on to season six and the Victory defence looks a bit different but they’ve brought similar results.

Predominantly the team is young, and not without experience. The defence and the Victory team in general, have recruited well, reinforcing their ranks with a couple of international players and they’re definitely ready for the W-League Grand Final this weekend.

Maika Ruyter-Hooley departed for most of this season due to international study commitments. Ruyter-Hooley must have missed the gang though and has returned to the fold, adding some much needed height.

To the untrained eye, Ruyter-Hooley might look a little slow, but her amble is quite effective and you will usually find her in the most valuable of places. At 26, Maika also adds some much needed experience to the team of youngsters.

Another season 5 player, Rebekah Stott hasn’t been so fortunate. Unable to secure clearance from her international club, SC Sand in Germany, Stott can only watch from the sidelines.

With change comes opportunity though.

Dave Edmonson joined as Victory’s coach and he brought with him a tall young player named Emma Checker. In her first matches for Victory, 17 year old Checker seemed to flow along with the ball and impressed many. 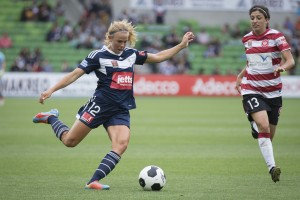 Whilst high intensity matches have sometimes brought poor passes under pressure from Checker, that’s how young players develop - on the ball in real matches.

Checker hasn’t shied away from the challenge and having guest international Lauren Barnes to provide support and encouragement probably doesn’t hurt either.

Checker has the perfect build for a defender. Tall, strong and capable in the air. Add a splash of pace and Checker is a definitely a player to watch now and in the future as she develops in the Victory supportive environment.

Melbourne has two key defenders who like to play high. They compliment each other and their midfield.

Jessica Samuelsson is a hard working, 22 year old Swedish international who deserves more than a goal or two at this point. Jess settled into the Victory style of play immediately and loves to push up forward on the right flank.

She has a powerful strike and great vision on and around the ball. Samuelsson also has a fair bit of pace and you won’t find too many opponents getting past her which will be crucial in the Grand Final against Brisbane.

On the other side of the ground, another youngster, 20 year old captain Steph Catley shows similar flair and can just as often be seen flying up the left flank.

Catley has just signed with the Portland Thorns in the NWSL and adding a W-League crown to her list of accomplishments before she departs is pretty high on her list.

Catley has plenty of pace, never gets flustered and is a commanding presence in the backline of Melbourne Victory and the Matildas. 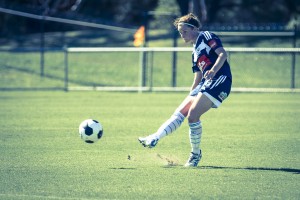 Alex Natoli is also part of the lineup. Natoli has had some niggling injuries during the season which has reduced her playing time, but the tall 18 year old has plenty of experience for such a young player, having represented Australia as a 13 year old and there’s plenty of talent to work with.

Then there’s 27 year old Jess Humble, who scored her maiden W-League goal just last week. As the oldest defender in the squad, Humble has been an indispensable stalwart in the Victory squad this season.

A level head helps everyone execute just a little more cleanly and perhaps she will earn a reputation as a goal sneak from hereon?

Melbourne’s newest international recruit is none other than Jessica Fishlock’s Seattle Reign teammate, Lauren Barnes. Whilst it remains to be seen if Barnes will be named in the midfield or defence, her impact to the team has been immediately apparent.

An ace with a dead ball and something of a corner specialist, Barnes is tenacious and the 24 year old guest defender has enough poise and composure to bolster the ranks. Barnes is a critical component to the Victory defence and is playing impressive football.

Last but not least in all of this is the one and only Brianna Davey. The 19 year old goalkeeper likes to keep a clean sheet and constantly moves her team around, directing them from the backline.

Davey has great athleticism and played particularly well last week in the lead up to the Grand Final. Whilst occasionally surprised from long range, Davey’s short game and reflexes are sublime. Davey has a strong vertical leap and ability to cover and recover quickly.

There is no doubt that this is a strong defence. There’s plenty of depth, expertise and passion. There’s young and less young. Local and international.

Whatever happens, it will be a great contest between attackers,midfielders and defenders in both navy blue and orange.