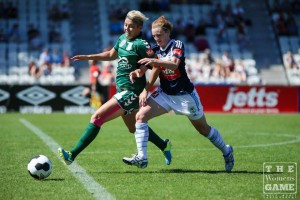 It was a tough encounter between two talented teams at Lakeside Stadium on Sunday, with Melbourne Victory just managing to steal the win from a threatening Canberra United thanks to top goalscorer Caitlin Friend slotting home the winner in the 2-1 win.

Controversy might be the first word on everyone’s lips after this match. One goal looked to come from a clearly offside position and the other, moments later at the reverse end, was a close call ruled offside.

That’s sport as they say but no-one wants that to be the decider.

Either way, Melbourne were slightly on top in this meeting, with both teams digging deep in the battle for a point or three.

Often the most anticipated matches end up being boilovers. Too much hype and not enough substance but that definitely wasn’t true of this match.

Both teams delivered with attack and counterattack. Both coaches moved things around with Stephanie Ochs switching from left to right and Lisa De Vanna doing the same to try and break through the defence.

Her speed, skill and intuitive movement generated space where there wasn’t any and created multiple goal scoring opportunities along the way. What was even more impressive about De Vanna’s game this week, was her commitment all over the field as she made attacking runs but also raced back to apply pressure in defence.

That said, De Vanna’s pace seems to present some problems in that as much as she can race away from the opposition, she sometimes also races away from her team and no-one can catch up to support her.

This is a great problem to have. It was also interesting to see De Vanna passing the ball off so frequently when she’s close to the box where perhaps she should create the angle and take the shot herself.

This was also a game of the midfields. Victory’s Katie Hoyle, Jessica Fishlock and Gulcan Koca against United’s Lori Lindsey, Caitlin Munoz and Kendall Fletcher. Pinpoint passing was the name of the game and it was entertaining to watch.

The good news for Victory is that they started this match much better than their previous games. Right out of the blocks they got busy controlling the ball and setting a good tempo. Canberra were able to make some dangerous fast breaks but Melbourne had most of the early possession.

Not to be outdone, Canberra were menacing with Lindsey and Fletcher combining with Michelle Heyman and the powerful skills of Ochs. Ochs had a brilliant shot on goal early in the match. From a standing start, rifling a powerful strike that hit the crossbar but otherwise gave Victory goalkeeper Brianna Davey no chance.

In a game of teams, to pick one player who played well is an impossible task. Tellingly, Hoyle and De Vanna both credit the growing closeness of the team as the defining factor of their season.

Melbourne coach Dave Edmondson is very comfortable with his starting eleven but it was good to see some movement with Cindy Lay, Laura Spiranovic and Beattie Goad all given opportunities back on the field.

Lay was instrumental in the deciding goal, flicking a neat pass off to Friend who made a difficult volley look easy enough for the hoi polloi to replicate.

Fishlock took a heavy knock in the game but was able to play on. Her ability to control the ball is highly entertaining particularly her aerial prowess which is a bit like a cat maneuvering in the air and deftly controlling the ball.

Two of the best goalkeepers in the league were on display in this match. Both Brianna Davey and Lydia Williams were almost flawless. In the W-League we’re fortunate to have so many great goalkeepers which bodes well for the league and highlights the challenges Matildas’ coach Hesterine de Reus will face.

What didn’t work so well for Melbourne was wasted opportunities and putting themselves in difficult situations, either through attempting to be too tricky or indecision on the ball and then being dispossessed.

Canberra on the other hand possibly needed more support for Heyman up forward. One high striker isn’t enough to challenge the quality of Melbourne’s defence. Heyman was creative but was unable to really break through and make a difference.