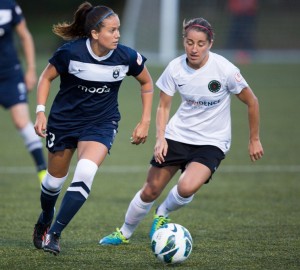 American and Seattle Reign defender Lauren Barnes as joined Melbourne Victory as a guest player for the remainder of the 2013/2014 W-League regular season and finals series.

The Reign Defender of the Year, Barnes will be available for selection for Melbourne Victory's fixture against the Newcastle Jets in Round 10.

“I think Lauren is a fantastic player and I know exactly what she’s capable of. She’s a good girl as well, so I’m really looking forward to meeting up with her again in Melbourne," said Reign teammate and Victory midfielder Jessica Fishlock.

“She can bring balance to the defence as well as she’s left footed, so that helps an awful lot.”

The former Philadelphia Independence defender  has also represented the US national women’s team at U15, U20 and U23 levels, and with last year's top defender Rebekah Stott all but confirmed as a non-starter this season, Barnes' signing is set to bolster a young Victory defence as the ladder leaders commence preparations for the finals.

“What she’ll bring is a little bit of composure and experience to our backline. Our backline is so young and with Lauren you have someone who can hold and educate that defensive line with experience.

Melbourne Victory will look to continue their seven game unbeaten streak  against the Western Sydney Wanderers this Sunday at Campbelltown.