Melbourne didn't have it all their own way against Adelaide | Credit: Emily Mogic 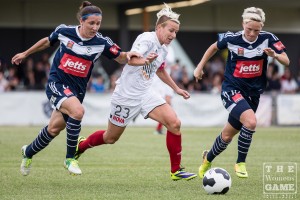 Melbourne didn't have it all their own way against Adelaide | Credit: Emily Mogic

In a completely unscientific analysis, one would’ve expected at least a 3-0 triumph to the ladder leading Victory squad.

This is said without malice or lack of understanding of Adelaide’s qualities, more so that with all Victory’s firepower and pedigree, you couldn’t be considered crazy for thinking otherwise.

Adelaide’s players and coach Ross Aloisi, should be commended for their composure and commitment throughout the game.

Moore was generally well marked throughout the match in the captain on captain encounter with Steph Catley and it was excellent to watch a couple of energetic foot races between the two.

Melissa Barbieri continues to impress in her comeback season.

Her composure and leadership on the field is one of the significant differences in the Adelaide squad this year. On several occasions, the Adelaide goalkeeper just said "no" as she continues to do throughout this W-League season, stopping almost every shot that comes her way.

Other impressive players for Adelaide included Lisa-Marie Woods who was defiant throughout the match. Jenna McCormick was also busy and tirelessly defended the Victory onslaught while Tiarn Powell provided an outlet up front.

Victory’s player of the match was a close contest between Swedish import Jessica Samuelsson and local talent Gulcan Koca.

Samuelsson has settled in to the Victory atmosphere and showcased why she’s a key player in the Swedish National team. Soon enough, those long range strikes are going to find their mark in the back of the net ala Season Five Swedish import, Petra Larsson.

Season Five fringe player, Gulcan Koca has really stepped up and owned her space in this contest. Koca is fitter and more confident this year. Surrounded by the likes of Fishlock and Hoyle seems to bode well for her and Victory in general.

Like a broken record, Melbourne seem to have mastered the possession game but are still struggling to finish opportunities. Dominating control of the ball, Melbourne’s chances were easily shut down by Barbieri, particularly when they were delivered right to her.

Adelaide’s only real opportunities to equalise or take the lead were a few fast breaks with Kristy Moore at the helm. There was not enough width or depth to their game but this was probably a strategy rather than an error given their compact structure was a method to shut down Melbourne’s scoring chances.

Adelaide’s defence continues to impress but their forward line needs a bit more depth to legitimately challenge the big four, although Moore on the counter can really make an impact if the defence isn’t on their toes.

An interesting side note was to see that Dave Edmondson didn’t use a single substitute throughout the match.

Say what you will about Victory’s depth, but the only real reason to make a change would be to switch in another striker but there were none on the bench. With Ash Brown’s season ending injury and Tiffany Eliadis unavailable overseas, Laura Spiranovic is the only other option and she was unnamed in the squad. Expect this to be rectified next round.

Going into this match, the Victory clan were really looking forward to all the promising elements of their form clicking into one cohesive machine.

Unfortunately it was still a largely frustrating struggle with the inability of Melbourne to penetrate through to the net. Coach Dave Edmondson was at least pleased with the three points and Victory’s ability to grind out a goal against a very defensive Adelaide United.

Adelaide’s match was positive from the perspective that their teamwork is strong enough to shut down offensive challenges, but for Adelaide to really jump up on the ladder, they need to win games rather than not lose them.