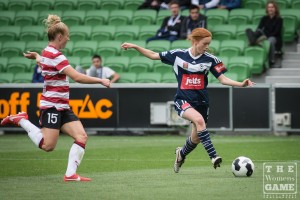 To the delight of an impressive crowd at AAMI Park, Melbourne Victory continued their unbeaten streak with a 2-0 result against the in-form Western Sydney Wanderers.

Leading up to this match it was hard to pick a winner given that the Wanderers looked hot in their last couple of outings and Victory still haven’t set the game alight to their massive potential.

The Wanderers opened the match looking arguably the better side in the first ten minutes.

Putting Melbourne a goal down early in the match might be one way to sap Victory’s confidence and change the game. Ultimately the Wanderers had a couple of early chances to score but were unable to convert.

These slow starts are a bit of a trend for Victory.

Invariably, they pick up their tempo, settle into their game and that’s when it gets exciting. But why they consistently start slowly is something to be analysed further because, as against the likes of Canberra United next week, that could be more than enough to swing the pendulum against them.

For the Wanderers, Teigen Allen was given the arduous task of managing the dangerous Lisa De Vanna and ended up being one of the Wanderers best players.

De Vanna was able to speed away on numerous occasions but she was often well held by the Wanderers defender. Allen was also seen slide tackling practically every other Victory player highlighting her tenacity and influence on the game.

Heather Garriock struggled with a few of the referee decisions but she seems to have lost none of her touch with her superb ball skills on display.

Emily Van Egmond was also a solid contributor for the Wanderers but generally their inability to control the midfield was a significant factor in their demise. This wasn't helped by the first half injury to Linda O’Neill which put a dampener on an otherwise enjoyable match.  With O'Neill's absence the Wanderers lost some midfield presence and an attacking option.

Best wishes to Linda for good news and a speedy recovery.

Victory on the other hand have everything going for them in the midfield.

New Zealand international Katie Hoyle was possibly best on ground with her coverage and disposal throughout the match. Jessica Fishlock’s influence was stifled by the Wanderers tight marking, but she still seems to time it just right to cause maximum impact with her distribution and the occasional shot on goal.

Gulcan Koca and Jessica Samuelsson both continued their good form from last week.

Samuelsson particularly had another standout game. For lack of a better word, she’s “dependable”. Basically you know she’s rarely going to slip up and almost always going to deliver and that’s just about perfect.

Caitlin Friend is dependable as well. She’s not a “flashy” forward like the speed possessed by De Vanna, but in using her strength and knowledge, she scored yet another goal, solidifying her place as the top goalscorer for the league and the highest ever goalscorer for Melbourne Victory. That’s not bad considering the likes of English international Jodie Taylor have graced the team list at Victory.

Enter 16 year old prodigy Beattie Goad and Melbourne have themselves a 2-0 victory and a few more striker opportunities to boot. First impressions when Coach Dave Edmonson subbed on Goad was one of confusion.

Why sub out Friend when she’s doing so well?

Slot Goad in on the left, slide De Vanna into the center and then it makes perfect sense. De Vanna immediately gets more space in the center of all places, Goad is practically unmarked and then the game is over.

Melbourne had some of their own missed opportunities. Fishlock narrowly missed a tough shot from the right edge of the penalty box, Friend’s unselfish play potentially missed another. Overall though, this was a solid performance from Victory over a Wanderers squad who failed to impress as much as last week.

At the conclusion of Round 7 of the competition, some of these teams and player combinations are really taking shape. It makes you wonder what sort of poetry we would see if the season was longer.