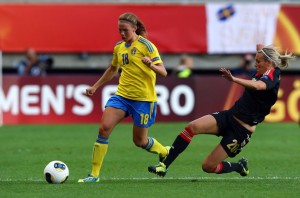 As reported on The Corner Flag, the Melbourne Victory are finally close to announcing a squad for the W-League team with Head Coach Dave Edmondson assembling what he hopes will be a side to go one step better than last season.

Along with Lisa De Vanna and Emma Checker, the Victory are set to potentially welcome a host of new faces.  The most exciting of these is Swedish international Jessica Samuelsson.  Samuelsson, who was the regular right back for Pia Sundhage's Sweden in Euro 2013, looks set to follow Linköpings FC teammate Brianna Davey to Australia and join the Victory for the upcoming season.

Pending international clearance, Samuelsson's move would be the latest in the burgeoning Linköpings/Melbourne Victory partnership which last year saw Petra Larsson at Melbourne with Davey currently finishing up the Swedish season in goals.

Melbourne's final international spot will be New Zealander Katie Hoyle. Following Melbourne's predilection for diminutive midfielders, Hoyle will look to be a straight replacement for Petra Larsson, who will not be returning this season.  A mainstay in the Football Ferns, Hoyle is strong on the ball with pace and a good passing range.  Follow Kiwi Rebekah Stott also may return to Victory with the central defender potentially doing a u-turn and leave German side SC Sand to return to the W-League.

Also on the cards for a return, this time from injury is winger Ashley Brown.  Brown, who tore her ACL in Round 2 last season is on the verge of completing her 12 month rehab and the pace midfielders return to the field would be a welcome one.

See an in depth look at the Melbourne Victory list on The Corner Flag.