Melbourne bounced back with a win on the road | Credit: Getty Images 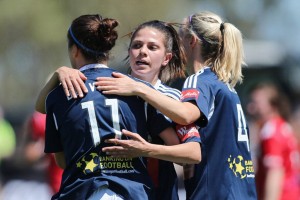 Melbourne bounced back with a win on the road | Credit: Getty Images

Melbourne Victory have bounced back emphatically from their opening round nightmare with a comprehensive 2-0 win over Adelaide United in Saturday's Westfield W-League clash at Burton Park.

Striker Lisa De Vanna converted a 40th-minute penalty to hand the Victory a deserved lead at the tail-end of a dominant first half before Caitlin Friend's headed goal in the 59th minute capped a fine recovery for the visitors who evened their season ledger following their shocking 5-1 embarrassment at the hands of Sydney FC.

The Lady Reds looked shaky from the outset, incapable of holding possession in the face of Melbourne's harassing pressing game, which forced incessant turnovers and created several open looks on the counter.

Victory captain Steph Catley forced United keeper Melissa Barbieri into a hot save in the sixth minute as the play was continually contained in Adelaide's back third.

Barbieri, kept busy throughout the opening half, conjured a fine reflex stop to deny winger Enza Barilla, who found space in the box in the 15th minute and another nice save on 18 minutes when Emily Hulbert rifled one from long distance.

A sickening, accidental head clash between Catley and Reds centre back Jenna McCormack left both players groggy and delayed play for some minutes, but the visitors' momentum remained unbroken.

Friend found a gap and squeezed one well wide to the right in the 36th minute as United desperately were clinging to a half-time stalemate with Melbourne charging hard.

After a series of near-misses, Victory, well in charge of proceedings, finally broke through, albeit with a slice of good fortune when Jessie Wharepouri, rather unluckily, was adjudged to have shepherded Barilla off the ball inside the box, much to the home side's clear displeasure.

After a lacklustre first 45 minutes, the Reds showed glimpses of improvement after the interval but the contest remained very much on the Victory's terms.

The visitors doubled their lead in the 59th when Catley's perfect cross from the left flank was nodded home by the ever-dangerous Friend, which created a more-than-adequate buffer and the Reds never looked anywhere close to making serious inroads.

The result lifted the Victory ahead of United on the W-League ladder and handed Melbourne coach coach Dave Edmondson a rewarding triumph against his former side.