A crowd of 3292 at Hunter Stadium plus those who watched at home on television were treated to perhaps one of the games of the season as Melbourne City had to fight for a tight 1-0 win.

A crowd of 3292 at Hunter Stadium plus those who watched at home on television were treated to perhaps one of the games of the season as Melbourne City had to fight for a tight 1-0 win.

On paper it appeared to be a matchup between the best attack against the equal best defence and that’s exactly the way it panned out.

Newcastle went in with a plan to stick together, play for each other, not fear the opposition and give the town something they could be proud of.

However, they were also tactically well set up and looked to utilise their strengths, their pace and defensive solidity, to their advantage.

They did exactly that with not only the best defensive performance of any side against City but also one of the best calculated attacking performances.

Defensive duo Megan Oyster and Hannah Bromley were almost impenetrable and really stood up against the likes of superstars Little, De Vanna, Fishlock.

Oyster in particular was superb. Constantly reading the play, stepping in and coming up with the ball whilst in goal Hannah Southwell continued to show why she’s undoubtedly the most improved goal keeper in the league making some critical saves to keep the Jets in the contest.

In attack Gema Simon was able to get in behind the City defence and deliver some good crosses into dangerous areas however the Jets, as in previous weeks struggled in front of goal registering no shots on target throughout the match and perhaps missed Rhali Dobson up front, who would have provided another pacey outlet in attack.

Half chances presented themselves to Logarzo, Kingsley with a header in the first half, and Jones whilst Tara Andrews had a great chance to go one on one with Davey after a defensive laps from City. Her touch to bring her past into the box was just a little too heavy and the moment passed.

Against the great sides you need to make the most of those half chances because they aren’t going to present themselves too often.

Newcastle have ambitions to play finals football and rightly so, there’s no doubting they have the defensive ability to go all the way however they need to improve in attack.

City came into the game with a new formation, a 3-4-3 away from home, such is the confidence of what is one of, if not the greatest side ever to grace the W-League with 516 international caps, who’d swept all before them and most pundits would have expected the dominance to continue.

City for the first time this season were really made to work for the three points, and at the end the day they came away knowing they’d earnt it.

In this formation the defensive midfielders, Fishlock and Aivi Luik, were excellent in providing the cover for the back three.

Fishlock's duel with Logarzo was an engrossing one with the former's experience winning out when it counted.

While they still controlled a majority of the match and the tempo, this was a different performance from City with some of the synchronicity - that has become a hall mark – missing.

The connection between the midfield and the attack was little more disjoined with the result few real incursions behind the Jets defence.

One person who did thrive in the formation was goalscorer Beattie Goad. Goad provides a natural wide but also able to combine inside with Fishlock, Little and Luik.

It was that combination that led to the match winning goal.

With a minute of time remaining in the first half, the Jets defence had so far held firm and withstood everything City had thrown at them.

Then Kim Little made a run across the edge of the box, laying it off to Beatrice Goad who looked up and decided to have a crack on her own.

Her goal bound shot took a defection and ended up in the back of the net to open the scoring.

It was not unjustified that City took the lead after dominating the majority of first half as they began write what would be the latest chapter in their undefeated run. This time though, no more goals came, and 1-0 it stayed.

Defensively Manchester City star Jennifer Beattie showed wonderful distribution skills from the back throughout the game playing a hand in the goal with a beautiful ball over the top to Little.

Truth be told City the ladder leaders were relatively comfortable but for the final 10 minutes when the Jets made a late charge. Melbourne City continue their unblemished record and it remains to be seen, who, if anyone can topple them.

In the 67th minute Tara Andrews appeared to be clattered to the ground in the box. On another day that may have been given a penalty and the game would have been very interesting at 1-1.

Both sides can walk away happy with their performances whilst also finding room for improvement.

For both sides, the next round sees home matches with the Jets taking on Adelaide United in the proverbial "six point" match.

Meanwhile City will host Season 7 premiers Perth Glory, where a win would see them mathematically seal a finals berth and the premiership; a fitting handing of the baton. 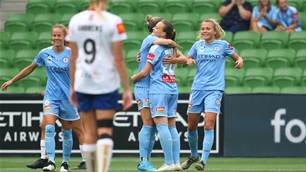