It seems to be with Melbourne City that it never rains, it pours, with the team bringing home a 4-0 win over Perth Glory on Sunday.

It seems to be with Melbourne City that it never rains, it pours, with the team bringing home a 4-0 win over Perth Glory on Sunday.

This mantra also applies to Melbourne’s moody weather. Only an hour prior to kick off, it was in the midst of a heatwave and by the time the teams hit the pitch for warm up, a chilly bout of rain had well and truly settled in.

The first half saw a slow start with Perth holding up a formidable defence against City. Chances were grappled with by both teams but nothing solid came of it.

However, the second half saw City sharpen up on their prior sloppiness, resulting in a four quick goals from Kim Little, Marianna Tabain, Larissa Crummer and Jessica Fishlock.

Rebekah Stott looked to have a solid chance at scoring her first goal for the season during the first half. Running up the right side, her performance was made notable by her taking risks on the ball and backing herself. She opened up chances for herself and her teammates.

Meanwhile, on the opposite wing, Steph Catley appeared merely as a streak of red as she pushed to get every ball and crossed many into the box.

Perth’s first half, despite sitting back, was not bare of goal-scoring opportunities, with the ever-speedy Caitlin Foord on the receiving end of some high balls. 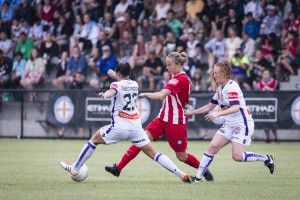 Vanessa DiBernando and Carla Bennett provided structure to the mid-field, with DiBernado consistently running back to protect and moving the ball forward. A volley from Bennett, veering outside of the goalpost, nearly had the potential to put Glory in the lead.

Whilst City dominated the first half, they did suffer some uncharacteristic misses on goal. Larissa Crummer sliced the ball across goals, with both Aivi Luik and Catley missing the simple touch needed to score. Captain Lisa De Vanna also made an unusual fumble in front of a bare goal.

As quick as a Melbourne cool change, City briskly changed the game in their favour. It was the pairing of De Vanna and Little who moved the score to 1-0. De Vanna made a neat pass through the Glory defence, prime placement for Little to slot it right in.

The following three goals were successful executions of what City had been aiming for all game, with Tabain – in her first two minutes on the field – and Crummer on the well-positioned end of smart passes. The fourth and final goal saw Fishlock finish with her trademark finesse, weaving effortlessly around players to take the shot.

Perth dished out a challenge for City, working defensively to keep the side at bay. Arnold said “I think we all knew going into Melbourne City it was going to be a hard game, but I think the first half we stuck together well. We started to connect together pretty well. But I think towards the second half we did fall apart a little bit.”

City were able to overcome Glory with a hefty score line, breaking W-League records with their ninth consecutive win. Coach Joe Montemurro said of the game “[Perth] have a couple of weapons in Caitlin Foord and Vanessa DiBernardo, and they looked to find some gaps in the middle of the park to hit us on the break. It wasn’t anything that was worrying us. It was just us fixing and tweaking the little bits and pieces we needed to to break their lines and we effectively did that.”

Perth will have a bye next week, and Melbourne City will be meeting Brisbane Roar at Perry Park on Monday 28th December, at 3.00pm (4.00pm AEDT) kick off.