If there is one thing the Matildas forward line has plenty of, it is pace.

If there is one thing the Matildas forward line has plenty of, it is pace.  Alen Stajcic has a blend of pacy wingers and mobile centre forwards to mix and match for the Olympics campaign.  Here are the strikers looking to fire Australia into medal contention.

Debuting with the Matildas back in 2004, Matildas’ co-captain, Lisa De Vanna has already written herself into plenty of history books but she is not ready to stop yet. An Olympic medal, and a gold one at that, is high on the list for the gifted speedster. De Vanna’s technical skills are a delight to watch and her goalscoring talents have seen her amass 39 goals in her 112 appearances.

De Vanna has twice been named in the FIFA Women’s World Cup All-Star Team (2007, 2015). Her commitment and passion have been rewarded with a Female Footballer of the Year Award in 2013 (Australian Football Awards) and also in 2013 her NWSL bicycle kick goal was nominated for the Puskás Award.

De Vanna was also the recipient of the Julie Dolan Medal in 2002-03 and was awarded the Golden Boot in the 2002-03 Women’s National Soccer League season.

It wasn’t that long ago that Michelle Heyman debuted with the Matildas, but since her first match in 2010, Heyman has established herself as a hardworking go to player. Her self sacrifice and hard working ethic sometimes belies her friendly, easy going nature but Heyman is a committed forward who strikes easily and has notched up 18 goals in just 48 games.

Few players are as recognisable as the remarkably talented Kyah Simon. Simon has the uncanny ability to lift teams as a super sub, or grind it out and destroy the opposition with her radar proficiency around goals .

Joining the National team in 2013, Simon has added 19 goals in 65 appearances and when Simon scores, the Matildas get pumped.

The Matildas received a huge boost with Sam Kerr back in the line up for the Olympics. Having missed months of football due to injury, Kerr’s exciting and dynamic play is hard to counter, with opponents often dazed and bewildered by her creativity.

Joining the national team in 2009, Kerr 43 games and 7 goals places her as practically a permanent fixture and rightly so.

Whilst you might struggle to find a video of Kerr’s 2009 W-League Goal of the Year perhaps this backflip celebration clip from the 2013 W-League Grand Final will lighten your day.

At only 20, there’s plenty ahead of Crummer and with the likes of Lisa De Vanna to show her the ropes, Crummer will be looking to dominate after debuting with the Matildas just last year.

Crummer was crowned NAB Young Footballer of the Year in 2015/16 and won the W-League Golden Boot in the same year. 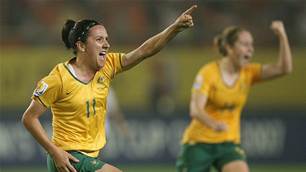