Australia are through to the World Cup.

Australia are through to the World Cup. As relieved as they are elated, the Matildas can turn their minds now to defending their Asian Cup title, after securing a place in the semi finals with their 2-0 win over Vietnam, and therefore a spot in the Women's World Cup 2015 to be held in Canada.

Every four years the Matildas play a match with a World Cup position at stake.

The. World. Cup. Hanging on this match.

Yes, there is a second chance now for Vietnam to win a playoff for fifth place and take the last Asian Football Confederation spot for Canada 2015. But the security that Australia now takes into the semi finals knowing they will take to the grandest stage there is in world football, is a flying carpet ride compared to the pressure now on Vietnam.

It was far from smooth sailing for the Matildas, although they enjoyed some slick passages of play – within seven minutes they had threatened Vietnam’s goal three times through Michelle Heyman’s forward pressing and Tameka Butt’s speed on her starting debut in this year’s Asian Cup.

"We were kind of just trying to dink the ball in the box and hope we could pop one away in the first 10 minutes. That didn’t work so in the second half we went out wanting to keep the ball and just play our game, but it’s always hard to play against teams like this.”

Vietnam had fewer attacking forays than the Matildas, but moved the ball swiftly through midfield on the counter attack. Generally they lacked firepower in their shots to trouble Lydia Williams and most were splayed wide or over the bar.

It does show the robustness of their team system that despite changing nine of their field players since their last match, they worked together as a unit and did not suffer nerves.

While it wasn’t the flawless display the Matildas turned up with in the first half against Japan, there were periods of sharp passing and movement from Australia, well anticipated runs forward, and tracking back to support the defence.

Katrina Gorry was more involved in this match, ducking and weaving, taking the ball to the defensive line and delivering the ball sweetly. Elise Kellond-Knight again sat back very deep, and might need more time in the position to gain the confidence to push on and support her high midfielders Gorry and Van Egmond.

Lisa De Vanna was again tireless; dropping back to cover in defence, and looked to selflessly pass off to team mates. Early on these passes did not make their mark, and she looked more effective in the second half when she went on to beat one or two players and have more space to deliver incisive balls.

Alanna Kennedy did well, covering a lot of ground and making quick decisions. There are still some unforced errors occurring in the backline and some shaky decisions made, reflected by comments from interim coach Alen Stajcic in the post match interviews, but the Matildas are looking like a team that will continue to grow and gel if the national team program allows.

Emily Van Egmond played strongly in the midfield for Australia and delivered a key blow in the victor’s first goal. It was credited as an own goal, scored after an indirect free kick was awarded when a backpass was handled by the Vietnamese goalkeeper Le Thi Tuyet Mai.

From the stands it looked like a reflex touch from a Vietnamese fullback which landed fortuitously in the keeper’s hands at the time, but the referee took that to be deliberate.

Van Egmond struck the free kick superbly, low and hard, anticipating the wall would be weakest next to the keeper. Mai did well to dive and parry, but the ball ricocheted off the back of the Vietnam wall's heels and into the net.

The second half was impacted by the heaviest rain storm of the tournament. Light rain helped ease the heat in the crowd at half time, but the skies opened in the 51st minute, flooding the pitch and surrounds for 20 minutes straight.

At times visibility was so bad that the entire pitch was a blur. Impressively, Australia maintained a lot of possession throughout this period, using steady tonks to move the ball to their team mates, rather than finessing as the Vietnamese tried, unsuccessfully, to do.

Heyman wasn’t put off by the storm. “It just reminded me of the last Asian Cup final. I was thinking we just have to keep the ball and be simple. I thought we’re winning 1-0 at the moment so if we keep it, then I guess it’s our game.”

Van Egmond was relaxed about the storm. “I’ve never seen anything quite like that rain before. This is my first Asian Cup. There’s not much you can do. You’ve just got to play to the conditions and I think the girls handled it extremely well.“ 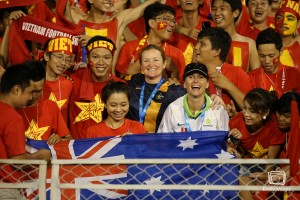 It was after the rain cleared that the Matildas suffered their most nerve wracking moment with Vietnam pressing for an equaliser. After a chaotic goal mouth scramble, Lydia Williams reached down to pick the ball up before realising it had last come off a team mate’s foot.

Not wanting to risk a back-pass call, she was left unbalanced and the ball bounced dangerously across the face of the goal. Only Polkinghorn’s pace and Williams agility was enough to block the angle of the oncoming Vietnamese striker.

Minutes later, Katrina Gorry unleashed one of her trademark shots from outside the 18 yard box, securing the win with a ripping strike on the 90th minute.

The relief was palpable in the Australian pockets of the crowd and on the bench. The Matildas did not celebrate the match wildly, they still have the Asian Cup title to retain, but their joy was infectious.

For Vietnam, they should be feeling confident, going into the fifth place play off against Thailand.

The home ground advantage is tangible at Thong Nhat Stadium. The hairs stand up on the back of your neck and you have no idea why. Then you hear it… the crescendo of four massive kettle drums at the halfway line, followed by the echoing tinny shimmer of cymbals.

One corner of the stadium glows red with Vietnamese fans in supporters’ shirts, with yellow farming hats arranged in patterns – a star for the first game, VN for the match up against Japan, and banners spelling out ‘Vietnam’ for their game against Australia.

The Vietnamese women’s football team took a leaf from their supporters’ book and have built to a crescendo in this tournament, hoping to finish with a bang on Wednesday with a World Cup position.

The Vietnamese captain, Le Thi Thuong, excelled again in central midfield with some good touches. Not afraid to play through the midfield, out the back and providing diagonal balls up front, Vietnam have had some success moving the ball in the star formation featured on their flag.

They are an exciting and passionate team who pressure to the end, and will give their supporters great pride regardless of the result on Wednesday.

The Matildas face the Korean Republic in the semi final on Thursday, May 23.

For now, the result against Vietnam is in the bank, and Australia have booked a ticket to Canada. Oh Canada. 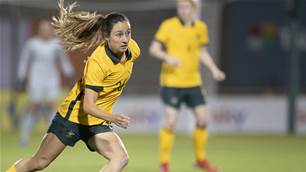