Matildas star Ellie Carpenter has claimed the European crown with Lyon but her triumph was soured by a potentially serious knee injury, just over a year out from a Women's World Cup on home soil.

The full-back was substituted after 13 minutes in Lyon's 3-1 win in the UEFA Women's Champions League final after her knee gave way in open play.

A few minutes earlier she had hurt it while challenging Fridolina Rolfo.

Carpenter received her medal on crutches with her left leg in a brace which ran all the way up to her thigh.

If as, feared, Carpenter has suffered a ruptured anterior cruciate ligament, the 22-year-old will be in a race against time to regain fitness before World Cup in July 2023.

Football Australia is awaiting further news of Carpenter's injury from Lyon's medical team, the severity of which likely cannot be confirmed until after scans.

Carpenter has been a lock at right-back for the Matildas since debuting as a 15-year-old in 2016 and has developed into one of the world's best wide defenders.

If an ACL tear is confirmed, Carpenter would be the third Matildas player to suffer the injury in the past 12 months, after Chloe Logarzo and Holly McNamara.

Carpenter's quality is arguably irreplaceable but Charlotte Grant and Karly Roestbakken are two options at right-back for upcoming friendlies against Spain and Portugal.

Lyon were already a goal up when Carpenter departed, Amandine Henry having scored a stunning goal after six minutes, winning possession before scoring from 30 yards.

Catarina Macario tapped in a Hegerberg cross with Barca in disarray before Putellas scored in the 41st minute to give them hope.

A second angle of Ada Hegerberg and Catarina Macario's goals 🎥

Though Patri Guijarro hit the crossbar in the 58th minute from 50 yards Barcelona were unable to get the second goal which could have had Lyon worried.

She is now the top scorer in the #UWCL this season. 🎯

Lyon have now won eight of the last 12 Women's Champions Leagues, but this was as warmly received as any having been eclipsed in many people's eyes by Barcelona.

However Lyon, who beat Barca 4-1 in the 2019 final, did not play them in last season's competition having been knocked out by domestic rivals Paris St Germain.

But they did not have Hegerberg in the team then as she was recovering from an ACL injury.

The Norwegian said pertinently before the final, "There was women's football before Barcelona, and it was played here (Lyon) for years. We have to win again to regain our place in world football."

Hegerberg's recovery - she was outstanding in the final - offers hope for Carpenter if, as feared, she has also suffered ruptured her ACL. 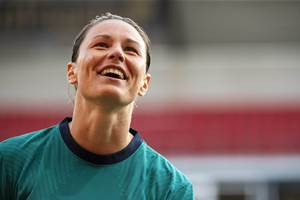 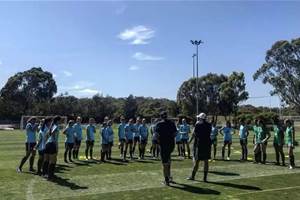 More information can be found at using the link..