A 21 player Matildas squad has been named by head coach Alen Stajcic to take on China in Melbourne and Geelong.

A 21 player Matildas squad has been named by head coach Alen Stajcic to take on China in Melbourne and Geelong.

The two game series are Australia's final internationals for 2017 and the Matildas will hope to continue their eight game unbeaten streak.

“Our focus all throughout this year has been building the depth of the squad in the lead up to the 2018 AFC Women’s Asian Cup in Jordan,” said Stajcic.

“Our two games against China PR will be our 10th and 11th matches this year, and I believe that throughout 2017 we have progressed significantly."

The bulk of the squad participated in Australia's last internationals in September against Brazil but with a couple of new names including Michelle Heyman, Kyah Simon and Larissa Crummer with the trio all returning from long injury lay offs.  The versatile Amy Harrison has also been included in the squad with Adelaide United goalkeeper Eliza Campbell making her first senior Matildas squad.

“China PR are a very good team and will provide a tough test for us next week. Hopefully we can build on the fantastic support we received in New South Wales while in Victoria, while also progressing further as a team,” Stajcic concluded.

Stajcic also confirmed that the Matildas will return to the Algarve Cup in 2018 with Australia finishing fourth in 2017.

Both matches against China PR will be broadcast LIVE on FOX SPORTS 501 and SBS VICELAND.

Tickets to see the Matildas play in Melbourne (Wednesday 22 November) and Geelong (Sunday 26 November) are available at: https://matildas.footballaustralia.com.au

Both matches will be broadcast LIVE on FOX SPORTS 501 and SBS VICELAND. 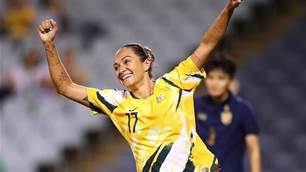