See how the Matildas rated in their 1-0 win over Chile in game two of the series.

Looked creative and determined. Plenty of class from the new Wanderers signing.

Substituted after 65 minutes after putting in a solid shift.

A beautiful finish to beat the Chile keeper Natalia Campos at her near post in the 22nd minute. Before that it was a powerful and brilliant run to get herself into position.

Also set up Carpenter three minutes later with a neat one two. Delivered plenty of run and dangerous balls into the box, clever balls to get past and over opponent.

Also worked hard in defence. Substituted in the 62nd minute but did her job very well.

Always involved in the game especially in attack. Nice ball to Kerr which led to the penalty in the first half.

Looked threatening and was a nice link up player to the Matildas forwards. A very solid game from the classy and reliable midfielder.

We know how Kerr can score goals…but how about the neat assist to Gielnik? All class!

Used her experience to win a penalty right before halftime after cleverly dinking the ball away from Campos and drawing the foul. However she missed the penalty after an excellent save from Campos, bringing back bad memories from the World Cup.

Hit the cross bar in the 48th minute after receiving a great ball from Catley.

Came on in the second half much to the delight of her home crowd. Did her job in defence and looked solid throughout.

Lucky not to be booked for an attempted hip and shoulder in the Chile box but her physicality is one of her strengths.

65th minute sub. She was involved when she came on but with only a quarter of the game to make an impact, she didn’t have much opportunity.

Nice passes which are her strength but had little time to do a lot.

76th minute sub. Didn’t have much time to make an impact. 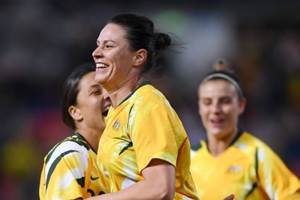 Two out of two ain't bad. But perhaps it's not that great either. Or are our expectations too high? Lots of questions posed by the Matildas 1-0 win over Chile, here are some of our answers.
Previous Page
1 2 Single page