Gorry first made her debut in the 2009-10 season, playing for Melbourne Victory.  She then moved to Adelaide United for her second professional season before returning to Victory for another campaign.

The midfielder then moved home and has since spent the past nine seasons in her home state with Brisbane Roar.  Gorry will become the third woman to spend a decade with the Queensland club, joining the ranks of Tameka Yallop and Clare Polkinghorne.

"I've got myself a good baby! She sleeps really well at night, feeds really well. We've had a really exciting start to the journey.

"Being a mother has changed my perspective on a lot of things but I'm really looking forward to this season and I think it's going to be a fun one."

The two-time Premiership winner has 116 A-League Women appearances and 25 goals under her belt.  She also has 29 club appearances from overseas in the American NWSL and Norwegian Toppserein.  The fairly young Brisbane Roar side will benefit from Gorry's experience.

Gorry expressed her excitement of re-joining her hometown team and the expectations she has about the season ahead:

"The Roar is home for me.  I love being part of the team with the supporters we have and I love calling Brisbane home.

"I'm excited to come back for my 10th season. It's a different bunch of girls, which is always exciting. New people bring new personalities and new flair to the team.
"As Brisbane we always want to win. We're here to win whatever trophy we can and set the standards high. We've carried that since the start and that’s part of our identity."
Brisbane Roar's Head Coach Garrath McPherson echoed Gorry's excitement about her addition to the squad:
"It is wonderful to have Katrina back in orange for the upcoming season. We are excited to have her and Harper join the team.
"She will be a leader for our younger players and is a role model for the next generation coming through Brisbane Roar and the Matildas.
"We are excited to support her as she returns to professional football after starting her family and look forward to creating an environment that enables her to thrive."
The Matildas midfielder has made 78 appearances for the Australian national team.  Her last appearances in Green and Gold were in February 2020 during the AFC Women's Olympic Qualifying campaign.
With Gorry's addition, Brisbane Roar have signed 17 players to their 2021-22 squad.  The team has also signed Annabel, Haffenden, Jessie Rasschaert, Lanni McDougall, Meaghan McElligott, Cannon Clough, Jamilla Rankin, Mariel Hecher, Holly McQueen, Shea Connors, Georgie Worth, Anna Margraf, Hollie Palmer, Larissa Cummer, Ayesha Norrie, Ria Kitano and Mia Bailey for the upcoming campaign. 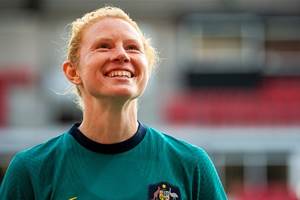 Australian COVID-19 quarantine restrictions have led to some A-Leagues contracted Socceroos and Matildas remaining abroad instead of coming home after international duty. They have turned to European clubs to keep training.
Brisbane Roar open their season on Saturday, December 4, 2021.  Their full schedule can be found using this link.