Polkinghorne joined Vittsjö ahead of this 2021 Damallsvenskan season.  Since her arrival she has started in eighteen matches and scored one goal.  While it is not her first season abroad, having previously played in the NWSL and Norwegian Toppserien, it is her first in Sweden.

The 32 year old also has extensive A-League Women's experience, having played in every single season for Brisbane Roar since the top flight of domestic Australian football was created.

"It is gratifying for all of us football lovers that we will see Clare Polkinghorne continue with Vittsjö in the coming seasons as well.

"The defender, who has impressed in the Damallsvenskan this year, has signed for the seasons 2022 plus 2023.

"Of course, there was great interest in Clare from other clubs, which is not surprising as Polks has shown in match after match that she belongs to Damallsvenskan's absolute best defenders.

"She contributes, not only with a professional attitude but also with a huge routine with her over 130 A-international matches for Australia.

"Despite her experience and routine, Polks also show a great desire to develop as a football player, which is a great attitude and motivating factor in a squad."

Polkinghorne is also quoted in the club's official statement as saying: “From the moment I came here, it felt like home.

"It is a club with a great atmosphere and culture and it is because of the people who are involved in the club, everything from players and leaders to the fans.

"We have a talented squad of players who I believe have the potential to continue to grow and develop as a team and I want to continue to be a part of and contribute to."

Vittsjö are currently fifth in the Damallsvenskan with two match days left.  The season is scheduled to end on November 6, 2021.  It was not specified if her new contract will allow her to return on loan to the A-League Women during the Swedish offseason.

Polkinghorne could next feature in the two Brazil friendlies being held in Australia.  She was recently called into the Matildas camp for those matches. 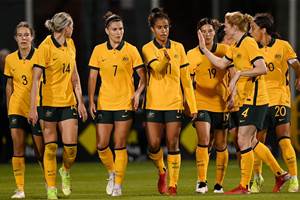