The Matildas have come from a goal down to defeat Brazil for a clean sweep in their two-game series after sealing a 3-2 win in Newcastle.

The Matildas have come from a goal down to defeat Brazil for a clean sweep in their two-game series after sealing a 3-2 win in Newcastle.

The match was played in front of a record crowd of 16,826 to see them win their third game in a row against the Brazilians.

Despite going behind early in the match, the Matildas capitalised on a strong second half to see out the match.

Matildas coach Alen Stajcic said his side was able to bounce back while still playing their style and brand of football.

“The resilience to go one nil down, did not really faze us and maybe we weren’t in the game for the first 10 minutes, which is an issue we need to address,” he said.

“I think by the middle of the second half we were the better team again and probably should have had more goals,” Stajcic said.

The match saw three changes to the Matildas starting line-up from their game on Saturday with Hayley Raso, Chloe Logarzo and Clare Polkinghorne coming in for Lisa De Vanna, Tameka Butt, and Caitlin Foord.

Brazil opened the scoring in the first minute as Marta crossed the ball into Fabiana for the tap in.

It was a hard one to take, as Marta exposed the right side of the defence while showing that she is still a force to be reckoned with.

The first 10 minutes of the match saw the Matildas struggle to keep composure, as they did not enjoy the spells of possession they had at Saturday’s game.

Once Australia found their feet they were dangerous but Brazil’s defence was strong enough to keep Raso and Sam Kerr at bay.

The changes to the starting XI also saw Steph Cately move to the left side of defence where she was able to run more freely, bringing the ball up the field, which helped in the Matildas attack.

However, it would take until the 38th minute for Australia to level the game and it came courtesy of a Kerr header.

The goal lifted the squad’s spirit and confidence as they headed into the break.

Stajcic discussion with the team at halftime saw the side coming out ready to take the win.

“We just went back to our game plan on how to pick them apart and once the girls started doing that we found holes and space everywhere,” Stajcic said.

“I thought we did that 20 or 30 times in the second half and probably should have scored a couple of more goals with it.

“When you give our players room and time on the ball, we have the opportunity to hurt you,” he said.

The second half was a change and it started with a hungry Caitlin Foord coming on as a substitute. She made an impact right away as she scored a goal to give Australia the lead.

Australia continued to dominate the second half creating chance after chance, frustrating the Brazilian side that allowed Australia to have space on the ball.

It led to a Staj inspired goal, with a one-two between Logarzo and Van Egmond to give Kerr her second.

The game seemed all but over for Brazil as the continued to the terrorised by the Matildas attack.

But as they say, it is not over to the fat lady sings, as Brazil was award a controversial late penalty after Ellie Carpenter “apparently” brought down Marta in the box.

It would make for some tense moments in the last 10 minutes of the match as tempers began to flare, and it was lucky not to see the referee, Lara Lee, pull out a red card.

Matildas midfielder, Emily van Egmond was one of those players caught up in a tussle with five-time Women’s Player of the Year, Marta.

“It was a good atmosphere to play in front of and I think the momentum kind of shifted in different periods of the game,” she said.

“I feel like we dominated towards the end of the first half and the beginning of the second half.

“We have lost our composure towards the end a little bit but I think what we’ve got really good at in recent times is seeing the game out,” van Egmond said.

The Matildas are set for another two-match series this time against Asian rivals, China PR in November at AMMI Park in Melbourne. 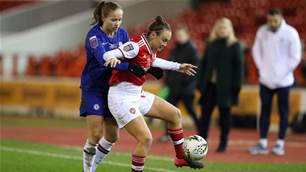